A Review: Adam Silvera's History Is All You Left Me

Today's review is of one of the most highly anticipated reads for me in AGES. I heard about Adam Silvera's writing about four or five months ago now, and once I'd heard the hype about History Is All You Left Me, I was eagerly waiting for its release date. It's a fairly short book, at just under 300 pages, but I managed to successfully drag it out over a few days PURELY just to make it last a little longer, or else I would've finish it in like two hours and had a major book hangover for a week. So, let's get into the review of this INCREDIBLE story. 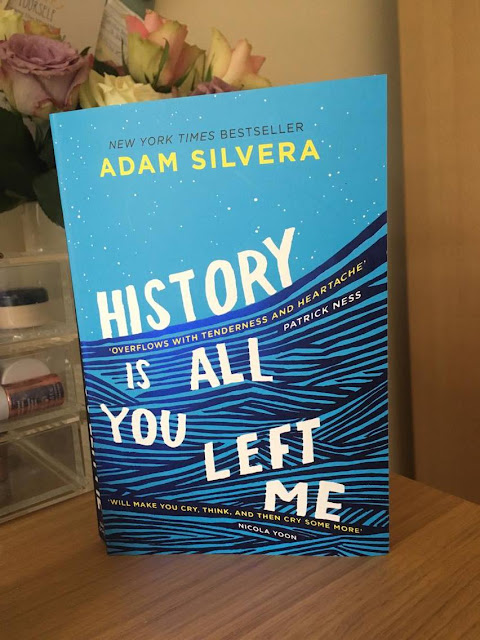 "I'll never understand how time can make a moment feel as close as yesterday and as far as years."

So, History Is All You Left me is the story of Griffin, a teenage guy, trying to grieve the death of his first love, ex-boyfriend Theo. At the time of Theo's death, he and Griffin were "just friends" and Theo was in a new relationship with Jackson, away at university in California, where he drowned.

"That was a dickhead thing to say. I need a condom for my mouth."
(Sorry, I know I usually pick the most beautiful quotes for these parts, but this made me laugh so much it needed its giant, bold type moment.)

The story is split between present day perspective, where Griffin grieves his loss, deals with his increasingly crippling OCD and develops a complicated relationship with Jackson, and flashbacks/recollection, where we learn about how Griffin and Theo went from best friends to boyfriends, had all of their firsts together, and eventually break up. That's when the memories turn to Griffin discovering more and more about Theo getting together with Jackson and oh my god that's when things get painful. For me, the moments where Griffin and Theo's Skype chat is interrupted by Jackson's arrival, Jackson tells the story of Theo saying "I love you" for the first time and Jackson showing Griffin his own cute kissing routine that he shared privately with Theo (the latter two are actually present day moments), are some of the saddest things I've ever read! I don't know what it is about Adam's writing of these moments, but they just broke my heart! Griffin's pain is just palpable.

"Thank you for being there for me when I'm stupid enough to think I'd rather be alone."

What I love most about Griffin as a protagonist/narrative voice is how honest he is; he is flawed, and never feigns perfection. He's incredibly funny (although Theo is funnier, for me) and real, and I just adored getting to know him better throughout his story. Jackson's character too was similar enough to Griffin to create the needed parallels in Theo's taste, but different enough to give him his own edge of individuality (I also felt great pity and pain for him, having to compare to Theo's first love, who obviously still meant the world to him right up until the last moment he was alive). Theo, although we technically never really meet him, is just the most gorgeous character. You can totally understand why these boys were fighting over him!

"We were something, but history isn't enough to keep something alive forever."

I'm gonna get this part of the review out of the way, because I feel like such a miserable bitch bringing it up again, but there was one part of the story that I wasn't massively keen on. SPOILER ALERT, if you haven't already read this one, then please look away now! For me, the Wade storyline was a little jarring. To begin with, it kind of came out of left field that Wade was gay, too, just because no hints had been made at this, and then I wasn't sure how I really felt about him being with Griffin. I wonder if this is just because I so desperately wanted him to be with Theo, still. I talked about it in more detail in my goodreads review here, so check it out if you want to here more of my thoughts, but honestly, I don't want to whine and moan about that little thing, because the rest of the book is so damn good. Besides that, Wade challenging Griffin on his OCD safety behaviours towards the very end of the book made me SO happy and proud (that's one thing that Theo never did, and I questioned why), so maybe he'd be good for him after all. (Of course this is when I need to remind myself that these characters aren't real FFS).

"There's nothing wrong with someone saving my life, I've realised ... people need people. That's that."

The relationship that develops between Griffin and Jackson reminded me SO much of the storyline shared by Lennie and Toby in Jandy Nelson's beautiful The Sky is Everywhere (one of my favourite books EVER), and it's such a clever concept - wanting to be as close as possible to the person who understands the grief you're feeling the most, and sometimes then, growing too close. The way they tried to rediscover the Theo they each didn't know was so sad and desperate and inevitably going to end badly, but so beautifully done, with so much sympathy. I think that sort of storyline could come across as a little too uncomfortable, and whilst there is some of that here, it's just the right amount, as though we as readers are sharing in Griffin's feelings of guilt and awkwardness. My heart hurt for the both of them.

This book overall is a beautiful LGBT read; I was smiling so much reading about Griffin and Theo's relationship, perhaps most of all because of the much needed normality given to it. I think reading about the struggle of accepting sexuality is amazing, but I loved how quickly Griffin and Theo fell into their relationship with one another, and how it wasn't written as this huge, abnormal thing. Their was written about as every bit as normal (but gorgeous) as any heterosexual YA romance I've ever read, and I just couldn't be happier about that.

"I have one last question for you: I didn't get our history wrong, did I?"

Posted by Exploration of Creation at 07:45