A Haul: End of Term!

Today's post is going to be a quick showcase of the books I purchased over the last week or so since receiving my exam results and finishing second year of university fully. Let me know if you've read any of these books and what you thought. What have you bought so far this month? 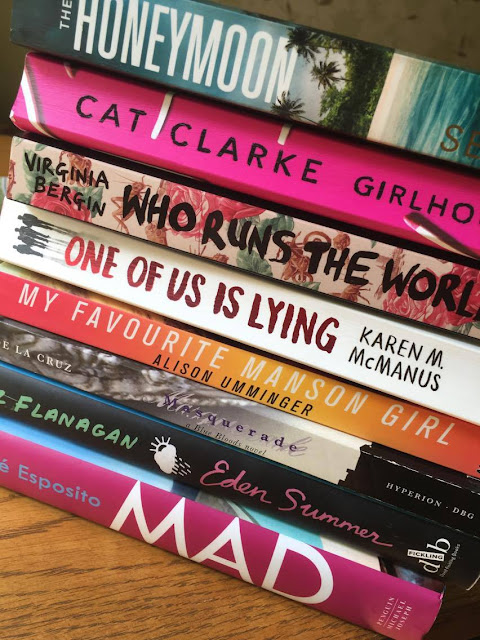 For as long as she can remember, Jemma has been planning the perfect honeymoon. A fortnight's retreat to a five-star resort in the Maldives, complete with luxury villas, personal butlers and absolute privacy. It should be paradise. But it's turned into a nightmare. Because the man Jemma married a week ago has just disappeared from the island without a trace. And now her perfect new life is vanishing just as quickly before her eyes. After everything they've been through together, how can this be happening? Is there anyone on the island who Jemma can trust? And above all - where has her husband gone?

Harper has tried to forget the past and fit in at expensive boarding school Duncraggan Academy. But Harper can't escape the guilt of her twin sister's Jenna's death, and her own part in it - and she knows noone else will ever really understand. But new girl Kirsty seems to get Harper in ways she never expected. Then Kirsty's behaviour becomes more erratic. Why is her life a perfect mirror of Harper's? And why is she so obsessed with Harper's lost sister? Soon, Harper's closeness with Kirsty begins to threaten her other relationships, and her own sense of identity. How can Harper get back to the person she wants to be, and to the girls who mean the most to her?

Virginia bergin’s who runs the world?

Welcome to the Matriarchy. Sixty years after a virus has wiped out almost all the men on the planet, things are pretty much just as you would imagine a world run by women might be: war has ended; greed is not tolerated; the ecological needs of the planet are always put first. In two generations, the female population has grieved, pulled together and moved on, and life really is pretty good - if you're a girl. It's not so great if you're a boy, but fourteen-year-old River wouldn't know that. Until she met Mason, she thought they were extinct.

Karen m. mcmanus’s one of us is lying

Five students go to detention. Only four leave alive. Yale hopeful Bronwyn has never publicly broken a rule. Sports star Cooper only knows what he's doing in the baseball diamond. Bad body Nate is one misstep away from a life of crime. Prom queen Addy is holding together the cracks in her perfect life. And outsider Simon, creator of the notorious gossip app at Bayview High, won't ever talk about any of them again. He dies 24 hours before he could post their deepest secrets online. Investigators conclude it's no accident. All of them are suspects.

Anna has had a miserable year. Everything feels wrong with her life. And rather than stay and face the mess, she steals a credit card and books herself a seat on the first flight out of town to Los Angeles, to crash with her sister.When she's offered a job researching the murderous Manson girls for a dubious film, she reluctantly accepts - she needs the money. But soon enough, among the fake smiles and glitter-fuelled parties, things turn from strange, to dark, to dangerous ...This is not going to be the summer Anna had in mind.

Preparations are under way for the ball of the century. But as any true Blue Blood knows, it's the after-party that counts. And the cunning Mimi Force is getting ready to make sure her masquerade ball is the place to be for the Young, Fabulous and Fanged. But Schuyler Van Alen has more on her mind than fancy dresses, even if her crush Jack Force, is sure to make an appearance. She's getting closer to finding out what's been preying on the young vamps - and discovering the deadly secrets hiding under the masks...

When her best friend Eden doesn't turn up for school one morning, Jess's world is turned upside down. The police say Eden's missing, and her boyfriend Liam is the prime suspect. So Jess starts retracing her steps. She looks back over the summer they spent together. She starts to notice new things. She questions everything she thought Eden's summer had been about. And as the truth is revealed, she realises she needs to find Eden before the unthinkable happens...

"There's something you should know before we go any further: my heart is in the wrong place"... perhaps that's why nothing in Alvie's life has ever gone right? Until now. She finally abandon her credit card debt - and her fruitless three-way with Tinder and Twitter - when fate gives her the chance her identical twin's perfect life. It's just a shame Beth had to die to make Alvie's dreams come true... It might be madness, but rules are meant to be broken. Right?

So those are the books I rewarded myself with this week! I've already read Girlhood and One of Us is Lying and I really, really enjoyed them both! Look out for news of the rest in my June wrap-up at the end of the month!!

Posted by Exploration of Creation at 07:24