A Review: Louise O'Neill's Asking For It

This is the first post on my brand new book reviewing blog. I'm Katie, a University student studying English Lit with Creative Writing and as a consequence of that, I do a whole lot of reading (and writing). This blog will contain in depth book reviews of both Young Adult (because you're never too old to read YA) and Adult fiction, mainly of books that I love -  nobody really wants to read a crappy review, right? I'm going to try my best to post weekly reviews, although that seems an ambitious thought considering it's Reading Week and I'm feeling confident. Stick with me on that one.

I thought I'd start with a book that has stuck with me ever since I read it. I can't imagine a more appropriate time to be reading it (or writing about it) than right now, in the current political/social climate. This is Louise O'Neill's 2015 novel Asking For It. 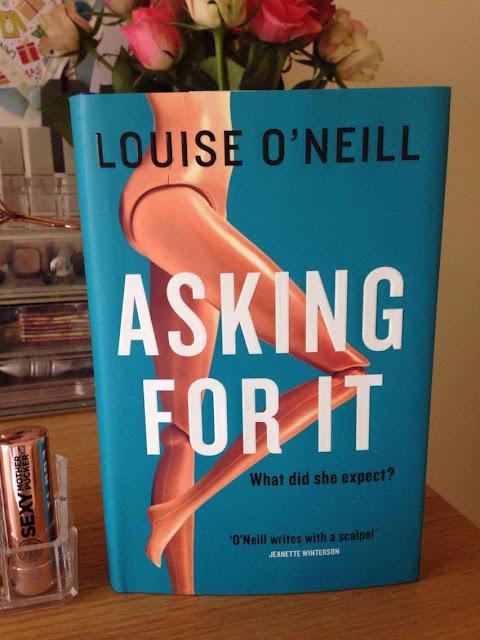 "They're good boys really. This all just got out of hand."

It's the beginning of the summer in a small town in Ireland. Emma O'Donovan is eighteen years old, beautiful, happy, confident. One night, there's a party. Everyone is there. All eyes are on Emma. The next morning, she wakes on the front porch of her house. She can't remember what happened, she doesn't know how she got there. She doesn't know why she's in pain. But everyone else does. Photographs taken at the party show, in explicit detail, what happened to Emma that night. But sometimes people don't want to believe what is right in front of them, especially when the truth concerns the town's heroes...

I think the first point to make is that this is not a happy-go-lucky, fairytale, romantic sort of story, so if you're looking for that, keep looking - you'll find plenty of wonderful examples! Instead, Asking For It is real, hard and at times uncomfortable to read. I have to admit, when a book can make you feel that way, it's got to be doing its job in my eyes. The book addresses so many difficult but significant topics - social media, "lad" culture, consent, victim-blaming and shaming and the concept that being a "celebrity" (no matter how big or small) lets you off of the hook. So yes, a really necessary thing to say right from the outset is that this book is certainly not for the faint-hearted, and yet I would encourage EVERYBODY to read it. I don't care about gender or age, this book is important as hell. It's not a pretty book, it's not romantic or even vaguely nice - even the ending is a challenge. We often turn away from the gruesome details, but Louise O'Neill makes that near enough impossible. I think it's a wonderful look through the microscope at the culture we are living in in the 21st century. It makes you think about your own words, your own behaviour, your own opinions. It might not be a fun summer read, perfect for propping up on your sun lounger and thoroughly enjoying, but it's still one of the best books I've read.

For me, one of the most important parts of the book is the way in which Louise O'Neill challenges us with her protagonist, Emma. It has to be said, rightly or wrongly, she isn't too likeable from the start. She's no villain, but she's absolutely your average bitchy teenage girl (I should know). She's invested in herself, her appearance, her popularity and boys. I think that's what makes the writing of her character so special; she could easily have been written from the outset as a martyr-type, sweet, likeable, innocent and unassuming. Instantly we'd be aligned with her. Instead she's if anything, slightly over-confident, she swears and she bitches. So many female protagonists are written as the first stereotype, so for me, Emma was a breath of bitchy fresh air. When this dreadful night takes place and she is hurt, taken advantage of and betrayed, it's a huge contrast. Testament to the strength of her character, she never really plays the victim card. Most of all, she's so brave.

"They say that I was asking for it."

Our distaste transfers to those around her. The "lad" culture. The girls who called themselves her friends, who are glad to finally have something to hold against her, loving every second of her so-say fall from grace. The grown adults who ought to know better. It's hard to decide who to hate most. I also think the inclusion of the slight "celebrity" or at least privileged aspect is key. I don't want to get too political, but in a world of Donald Trumps and Brock Turners, books like this one are few and far between. Too few and too far between. Another of a similar thread I've just finished reading is All The Rage by Courtney Summers - the story is definitely similar, but I'd say that there's more hope in that than Asking For It, especially in the novel's ending. It's also slightly less explicit in detail, although has similar vomit-inducing characters who treat the female protagonist horrifically in the aftermath, as though she were the real criminal.

"You know I'm on your side, right? I was just asking if it was, like rape rape."

If you haven't guessed already, the basic storyline is that Emma O'Donovan goes to a party one night with her friends. She goes upstairs with an older guy, but when she changes her mind, he ignores her. She drinks more and takes drugs and when she wakes up the next morning, she can remember little else. Social media is her insight; there was more than one guy involved, and the pictures are everywhere. Her friends turn on her, blaming her for being flirtatious. The media call her out for drinking too much, getting high, wearing the wrong clothes. Emma is not even sure her family are 100% on her side. Whilst everybody should at some stage in their lives read this, it's pretty explicit (in both language and details) so maybe save it until you're at least 15/16.

I have to say, this book made me cry sad and angry tears, and never any happy ones. I wanted so badly for somebody to give Emma a hug, and tell her it wasn't her fault. The only character who supports her fully is Conor - he is the sort of rare and wonderful human being everybody should have in their lives. Also a shout-out is due to her brother, Bryan, who supports her better than her parents and encourages her to pursue justice, even when she decides against it.

If you don't want to know how the story ends look away now!! The ending frustrated me for so many days afterward that I almost decided I didn't like Asking For It at all. It wasn't until I'd truly thought about it that I understood why it had to end that way. In real life, we don't all get happy endings, right? In real life, the privileged white male gets away with a lot. You have to look no further than the news this summer to know that to be the truth. A "champion swimmer" gets three months in jail for assaulting an unconscious girl - there is no justice in that. And in this book, too, justice is lacking, which now I realise, makes it all the more powerful. In the end, even Emma gives up on fighting for it and decides to try and live her life as though it never happened, having to pass the boys in the street, even.

The ending is bleak. In stories, any stories, don’t we all desire the characters to be tied up neatly, shining with ribbons and bows? All of their issues solved, baddies punished, heroes and heroines vilified and living happily ever after, in love and loved once more. If that’s what you’re looking for, maybe the ending of Asking For It is your worst nightmare. But I think it’s the most significant element of all, perhaps. Emma gets no justice, in fact, she is so discouraged by society and a lack of consequences for her abusers, that she decides to drop all charges and try to move on with her life. Whilst that’s brave in itself, it does mean we lack a certain sense of justice. Why do these boys get away with it? Why doesn’t Emma get something positive out of this? Shouldn’t she win? Shouldn’t we be able to close the book and feel satisfied that rape is bad and rape will be punished? Of course we should but O’Neill does not allow us to. This, for me, is the reflection of real life; this story is not a fairy-tale, and I’m sorry for the cliché, but it has no happy ending. If you’re looking for something a little lighter (and it’s really only a little) then I’d go for All The Rage, which is equally as important to read and beautifully written.

In or out of the locker room, the things said and done in the likes of Asking For It will never be okay. Considering a pretty gaping hole in education when it comes to rape culture and consent, I'd say this book is a wonderful place to start in educating yourself - not that it's a difficult lesson to learn. PLEASE read it. It will make you a better person.

Posted by Exploration of Creation at 04:26