Today's book review is going to be focused on Laurie Halse Anderson's wonderful 2009 novel Wintergirls. Slightly behind the times here getting to read this one, but I'm so glad I discovered it now  when I'm far more educated in the topics involved than I was at 12 years old! Quick random note, I kind of wished I'd bought the other beautiful covered-version (its white with blue, pink and silver accents if I remember rightly) but actually I'm glad to have this one because WHAT. A. QUOTE. So powerful and scary. Enjoy reading! 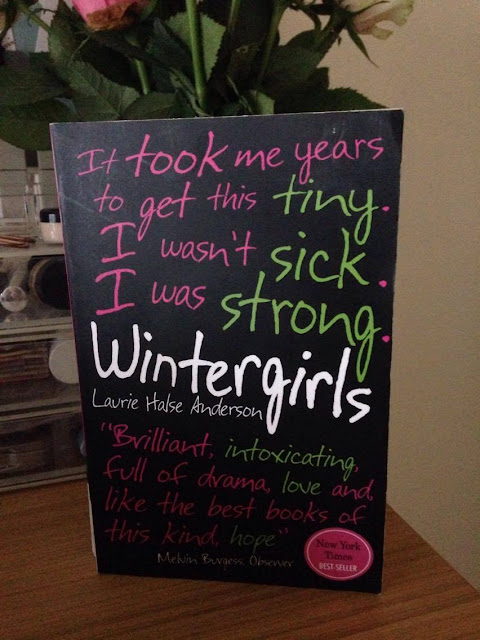 "It took me years to get this tiny. I wasn't sick. I was strong."

Cassie's body was found in a motel room. She called Lia 33 times before she died. Lia never picked up. Now the voice in Lia's head tells her to stay strong. Keep control. Lose more. Weigh less. Thin. Thinner. Thinnest. Maybe she can make herself disappear altogether.

Let’s get this out of the way from the very start – this book is about mental health and I couldn’t be happier to see people exploring that subject. It’s something incredibly important to me personally for so many reasons and this book handles it so perfectly. Wintergirls is the story of Lia, an anorexic teenage girl whose ex-best friend Cassie has just been found dead in a motel room. The story follows Lia fighting her own very real, very scary demons whilst also exploring her relationship with Cassie and Cassie’s death.

This book certainly does not sugar-coat (please excuse that awful pun) – it shows mental health to be every bit as terrifying and debilitating and isolating as it is in real life.

There is an imperfection to Lia and her story which is so real and so relatable. I can’t help but feel some mental health conditions, eating disorders especially, have become a little “romanticised” amongst the online generation and so I was worried this might be a tumblr-style (don’t get me wrong, I love tumblr, just not this aspect) portrayal of something utterly unromantic. Luckily it was quite the opposite. It isn’t a fairy-tale depiction of mental health, Lia is not a wonderful heroine who desperately wants to get better but the ending is hopeful and made me WEEP.

God I love the characters created in this book; they are all so varied and flawed and real. Lia’s step-sister, Emma, had to be my favourite, I think. Her innocence and desperation to help is a little heart-breaking. When Lia is told she can’t see Emma anymore until she gets better, I really felt her pain. Emma brings out the human side to Lia and separates her from her disease to give glimpses of her potential in recovery. I love seeing those glimpses, because it makes you want better for her so much more.

I found the exploration of parents really interesting in this book – Lia has a mother, father and step-mother and I liked and disliked them all for different reasons. I cannot imagine the difficulty and pain of being a parent and watching your child starve themselves, but the cold and clinical nature of Lia’s mother was really quite sad. She seemed all but ready to shout YOU’RE NOT TRYING HARD ENOUGH, and that might just be the worst attitude in the world. Lia’s father seemed to turn his back on the problem as much as he could, which was equally frustrating. Her step-mother was most interesting to me, loving her almost as her own but protecting Emma above all else.

Another element I love of the actual writing was the way in which "Lia" dealt with her conflicting thoughts. Every time she had a positive or honest thought she would cross through it and replace it with something that fit better with her illness-persona (for want of a better phrase to describe it). It's a small detail really, but I found it thoroughly effective - at times these elements even made me laugh a little, though not the one included (clarification seemed necessary).

Lia and Cassie’s relationship is well detailed despite Cassie never being properly present (she is dead from the outset and only talked about in memories/flashbacks). Lia admits to her own faults, explaining how she encouraged Cassie, who was a bulimic. Their friendship seems to have been incredibly toxic for both of them and Cassie becomes the tragic consequence of that poison. If anything, though, I want MORE Cassie. I don’t really feel like I understand her in the same way I do Lia, which may the intended effect, but I just felt I got to know a slightly blurry version of her character through a Lia-filter.

"I pulled her back into the snow because I was afraid to be alone."

One element I both enjoyed and was somewhat frustrated by was the almost-romance. The character of Elijah was really fun; he certainly came alive on the page, he broke up the melancholy of being inside Lia’s head with his attitude and humour, but his exit from the novel really bothered me. Lia goes to see him, in a desperate state near the end of the story and asks him if they can go away together. She’s taken out all of her savings from the bank and has bought him a pizza of bribery. He tells her yes but when she falls asleep, he runs away and takes her money with him, leaving her a note essentially telling her to deal with her demons, make up with her family and be happy. I didn’t mind so much that he left without her (although I would’ve preferred he stayed as he had such an interesting impact on her character – the hot chocolate moment is a special one) it was more so the fact that he stole all of her money that just BAFFLED me?! I understand he was hardly in a privileged position himself and had his own issues to escape, but I just don’t get why he did it. I’m not sure I believe he would’ve done that, based on what I got to know about him as a character. Do you agree or disagree?! I just found that moment sort of blind-sighting.

"There is no magic cure, no making it all go away forever. There are only small steps upward; an easier day, an unexpected laugh, a mirror that doesn't matter anymore."

Nevertheless, that was really the only slight jarring second during the process of reading this novel. I thought it was a wonderful, brave and very raw portrayal of a harrowing mental health condition. I loved the honesty, the graphic detail and the realistic interpretation of the protagonist.

"I am learning how to taste everything."

I want to really recommend this book. It definitely wont be an easy read. It won’t even be a comfortable one. But there is a stigma out there, surrounding each and every sort of mental health condition, and books like this battle that without romanticising, without excusing, without turning mental health into something pretty and explainable. Read it. I promise you, it’ll be worth it.

Posted by Exploration of Creation at 10:03