A Review: Holly Bourne's Am I Normal Yet?

One of the most talked about YA book series I've ever come across has to be the 'Spinster Club' trilogy by Holly Bourne. I'd heard such wonderful things about it that I knew I had to pick it up, and I briefly mentioned doing so in my Christmas book haul. It was one of the first books I read since the new year begun, and I have to admit, I'm finding it hard to believe much will beat it, although it's a long year ahead! I'm pretty much absolutely sure it will make it to my top books of 2017 and we're less than a week in. That's how great this book is. It's had so, so many five star, gushing reviews so I was getting increasingly nervous that it could never quite live up to its hype, but it completely, completely did. 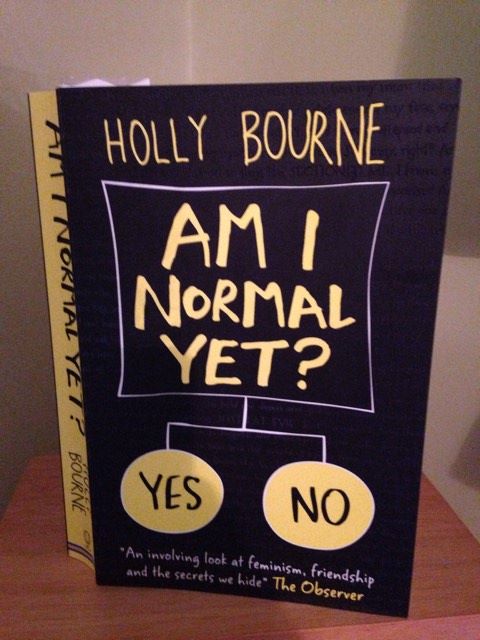 All Evie wants is to be normal. And now that she's almost off her meds and at a new college where no one knows her as the girl-who-went-nuts, there's only one thing left to tick off her list...
But relationships can mess with anyone's head - something Evie's new friends Amber and Lottie know only too well. The trouble is, if Evie won't tell them her secrets, how can they stop her making a huge mistake?

"Anxiety isn't chlamydia."
(Honestly, might be one of my favourite quotes EVER.)

I honestly don't even know where to begin when it comes to talking (writing) about this book. It's just the most awesome, relatable, accessible blend of feminism, friendship, romance, humour, mental health, family and yet its subtle, still, somehow. Evie is one of my favourite narrative voices I've ever come across because I found I had so, so much in common with her. I agreed with her on so many different topics, I felt her pain and sadness and frustration like it was my own, and I wanted her to be happy as though she was a real life friend.

"Mental illnesses grab you by the leg, screaming, and chow you down whole."

Evie suffers from both anxiety and OCD. Speaking from experience, I know plenty about anxiety (and incidentally thought that Holly Bourne depicted it absolutely wonderfully, it was completely realistic, I could think of actual times in my life where I felt identically to how Evie was feeling and it was never, ever romanticised = HALLELUJAH!). But I have to admit I really didn't know that much about OCD before reading this book and it totally opened my eyes. Evie's slow downfall into relapsing just about broke my heart and the conversations she had with her family members and Lottie and Amber in the hospital made me cry like a baby. No, really, throughout the last few chapters I was just crying nonstop (as well as, oddly, smiling and laughing, too). The most wonderful part was when Evie's mum told her how proud she was that, despite all of the pain and suffering Evie faced on a daily basis, she was still soft and kind, she hadn't let the world make her hard, she still cared. It was just gorgeously written, so real, so full of hope and pain and love.

"You may feel broken, but you don't break others."

The depiction of Evie's parents was so much better than often in YA - they weren't perfect, far from it, but they were realistic, they tried their very best and, most important of all, they really loved their girls a lot. Evie's relationship with her younger sister Rose was one of my favourite elements of the entire story - Rose was laugh out loud funny at certain moments, and learning about her own struggles made me so sad all over again.

"There was nothing I could do but hug her, as only sisters can hug."

The friendship between Evie, Amber and Lottie made my heart happy. They are all such thoroughly unique, independent, developed characters and, once combined together, the perfect protagonists. I really loved how realistic they were as teenage girls; we experience, particularly through Evie and Lottie's characters, this fight within them to be strong, independent, feminist young women (which they totally are) and yet these boy-based insecurities and desires. They're not perfect, they're real, instead. Also, for me whilst reading, very few books have ever made me actually laugh out loud, even if I can recognise the humour in them, or even smile at what I'm reading... these girls, though, are seriously, laugh out loud hilarious.

"Thoughts/Feelings: Am I normal yet?"

Speaking of feminism, it's like I said in the intro, this book explores feminism in a way that ANYBODY could read and appreciate/understand. The tampon conversation in particular was just brilliant to me. I thought Amber was bloody amazing during that first meeting of The Spinster Club and I was cheerleading for her throughout. I couldn't agree more with everything she said. They talked about so many funny, awesome things - the Manic Pixie Dream Girl, bachelor/spinster, being "tied down" whilst in a relationship. So clever, but written to be so easy to relate to so that any girl, or guy, reading can think of something in their life and say "oh wow, that was sexism and I didn't even know it" and so on.

"'I formally announce us... SPINSTERS through and through.'"

Holly also wrote about romantic relationships incredibly well throughout this book. The Ethan debacle was absolutely hilarious, and I kind of loved that by the end of the book he had become essentially a friend-like figure for Evie. Oli's storyline was so heartbreaking and I just winced painfully through the entire party where everybody made fun of him for the date (not entirely sure how I feel about them now being together - I'm onto the fourth book (novella?) of the series by now as I'm so obsessed). But the relationship with Evie's main love interest, Guy, was the most well written by far. Holly Bourne was so incredibly clever with this storyline, in my opinion. Because, from the start, where he sympathises with Oli and pays Evie a lot of attention and just generally seems to be lovely if not a bit of a fuck-up, I was totally backing him and Evie. Then, slowly but surely, things were said and done that made me cringe or hesitate. By that end scene in his bedroom, I had totally turned on him as a character. And I was sad about that, because he had such potential. But it's real that way, right? I liked that Holly didn't allow it to be all happily ever afters and that ultimately, her friendship with the girls and her relationship with her family members is what prevails.

Overall, I cannot say enough about this book without writing a 5000 word essay, and my reviews are long enough as it is (I'm well aware, don't worry). I'll just say go read it. Whoever you are, whatever you usually enjoy reading. It will teach you something you didn't know before. About mental health, perhaps, or feminism, or being a teenage girl. It's amazing. Simple.

"All you can do is try not to be one of those people who contributes to the bad."

Posted by Exploration of Creation at 06:33