Today's blog post is going to be the last one of 2016 - an amazing year for YA fiction. This post is going to be a brief overview of the books I bought for myself during December and those that I received for Christmas, too. I've only read a couple so far as I'm also battling through a reading list for a University module, but I'll be getting around to the rest very soon. Hope you enjoy and let me know which of these you've read and what you thought of them! 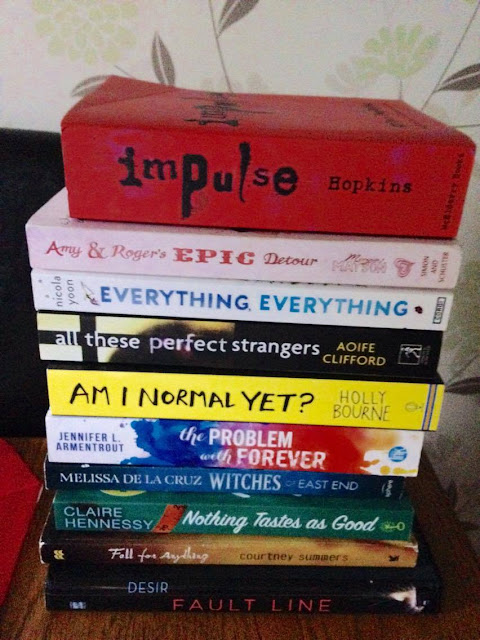 Tony's painful childhood memories can be quelled only through pills. Vanessa has a secret that keeps her coming back to the blade. And Connor seems to have the perfect life on the outside, but his inward battle with his parents, his peers and himself give him one last choice - to pull the trigger.

These are the three lives that would have been cut short if not for the hasty intervention by loved ones. Or fate. Now they are given a second chance at a better life - but only if they help one another, and if they find the strength to let go of their inner demons. For good.

Clearly this book is not going to be a walk in the park, but I have read some of the most incredible reviews of Ellen Hopkins' writing and, often, the hardest books to read are the best ones. The entire story is actually written in verse, which I didn't realise until I had the physical copy of the book, but at nearly 700 pages, the shorter form is going to make this an easier read, time-wise, I'm sure.

Amy Curry's year sucks. And it's not getting any better. Her mother has decided to move, so somehow Amy has to get their car from California to the East Coast. There's just one problem: since her father's death, Amy hasn't been able to get behind the wheel of a car. Enter Roger, the son of a family friend, who turns out to be funny, nice... and unexpectedly cute.

But Roger's plans involve a more "scenic" route than just driving from A to B, so suddenly Amy finds herself on the road trip of a lifetime. And, as she grows closer to Roger, Amy starts to realise that sometimes you have to get lost to find your way home...

This book sounds like far more of a relaxing read! I'm almost tempted to save this for the spring, when the weather will be warmer because it sounds like a great summery read, but I highly doubt I'll be able to wait that long. I've heard practically entirely positive things about Morgan Matson's writing, so I'm really excited to get reading.

EVERYTHING, EVERYTHING – NICOLA YOON

Live life in a bubble? Or risk everything for love?

Maddy is allergic to the world. She hasn't left her house in seventeen years.

Olly is the boy next door. He's determined to find a way to reach her.

I have to admit, I'm incredibly late jumping on the band wagon with this one. Everything, Everything is an incredibly popular book that I have heard so many people talk about and most seem to adore it. I recently received The Sun is Also a Star by Nicola Yoon via NetGalley, so I have that one to read, too. I'm really excited to experience her writing, as I've heard so many incredible things about it.

All these perfect strangers – aoife clifford

A fresh start. A new home. A time to make friends. A chance to hide from her past. University life means all these things to Penelope Sheppard.

But her secrets define her. And they may yet kill her...

I mainly picked up this book because I discovered it whilst browsing on Goodreads and was intrigued by the description of it. I've never read anything from Aoife Clifford before, so I'm looking forward to experiencing a new author's style. Thrillers aren't my go-to with YA fiction, but I do often enjoy them and they can break up long periods of sappy romance quite nicely!

AM I NORMAL YET? – HOLLY BOURNE

All Evie wants is to be normal. And now that she's almost off her meds and at a new college where no one knows her as the girl-who-went-nuts, there's only one thing left to tick off her list...

But relationships can mess with anyone's head - something Evie's new friends Amber and Lottie know only too well. The trouble is, if Evie won't tell them her secrets, how can they stop her making a huge mistake?

So, this is the first book in the 'Spinster Club' trilogy and I have to say, I have never heard such overwhelmingly positive reviews about a series of books before. Everybody I have heard talk about these books, or seen review them, has had pretty much 100% positive feedback for them. Evie is apparently a super relatable voice and the books are meant to be empowering, feminist and funny. All of these things sound pretty wonderful to me and this will probably be the next book I read! I hope the hype is true.

After years of homeschooling, Mallory must face a new milestone - spending her senior year at a normal high school. But she never imagined she'd run into Rider Stark, the friend and protector she hasn't seen since childhood.

It doesn't take long for Mallory to realise that the connection she shared with Rider never faded. Yet as Rider's life spirals out of control, Mallory must make a choice between staying silent and speaking out - for the people she loves, the life she wants and the truths that need to be heard.

I haven't heard too much about this book, but I thought the premise sounded great (it kind of gives me All The Bright Places/When We Collided feels, but I hope it's something entirely new of its own). Also, not that this makes any difference to the content whatsoever, but it's cover is absolutely beautiful. I did have serious struggles choosing where to put it on my rainbow shelves, though, I'll admit.

Freya, Ingrid and Joanna Beauchamp love their sleepy life in North Hampton. A new engagement, an interesting job, a happy home - everything is perfect. Yet these women are harbouring a centuries-old secret: they are powerful witches forbidden to practise magic. But when a young woman turns up dead, it soon becomes clear to the Beauchamp women that it's time to come out of hiding and fight the dark forces that are brewing.

After reading Laure Eve's The Graces a few weeks back, I was looking out for any more witchy-esque reads and I thought this one sounded fun. It was apparently turned into a TV show, so the book cover is awful, but I can get over that. Super excited to get into this one.

NOTHING TASTES AS GOOD – CLAIRE HENNESSY

Don't call her a guardian angel. Annabel is dead - but she hasn't completely gone away. Annabel immediately understands why her first assignment as a ghostly helper is to her old classmate: Julia is fat. And being fat makes you unhappy. Simple, right? As Annabel shadows Julia's life in the pressured final year of school, Julia gradually lets Annabel's voice in, guiding her thoughts towards her body, food and control.

But nothing is as simple as it first seems. Spending time in Julia's head seems to be having its own effect on Annabel... And she knows that once the voices take hold, it's hard to ignore them.

When I read the blurb of this book, I got immediate Wintergirls and Paper Valentine flashbacks (both stories about girls struggling with body image, eating disorders and the death of their best friends due to those issues). Wintergirls was probably right up there with the top 5 books I read in 2016, so if this book is anything like that, I'll be thrilled. It sounds like a very interesting, if slightly creepy, take on exploring eating disorders, and I'm really looking forward to reading it.

Fall for anything – Courtney summers

When Eddie Reeves' father commits suicide, her life is consumed by the nagging question of why? Why when he was a legendary photographer and a brilliant teacher? Why when he seemed to find inspiration in everything he saw? And, most important, why when he had a daughter who loved him more than anything else in the world? When she meets Culler Evans, a former student of her father's and a photographer himself, an instant and dangerous attraction begins. Culler seems to know more about her father than she does and could possibly hold the key to the mystery surrounding his death. But Eddie's vulnerability has weakened her, and Culler Evans is getting too close. Her need for the truth keeps her hanging on ... but are some questions better left unanswered?

This is one of the books I've already read, and at just over 200 pages, I managed it in a couple of hours. I just feel as though the blurb really emphasised the least effective parts of the actual novel. For me, Eddie and Culler lacked chemistry (apart from perhaps the motel scene) and this "instant and dangerous attraction" was just sort of nothing. I did like the conclusion with the mysterious messages, but as for the big mystery surrounding her father's suicide, it's not really concluded all that interestingly. Instead, I loved Eddie's honest narrative voice, her funny relationship with Beth and her cute friendship/romance with her best friend Milo. Overall, I preferred Summers' All The Rage - a startling rape culture read.

Ben could date anyone he wants, but he only has eyes for the new girl - sarcastic free spirit Ani. Luckily for Ben, Ani wants him, too. She's everything Ben could ever imagine. Everything he could ever want. But all that changes after the party. The one Ben misses. The one Ani goes to alone.

Now Ani isn't the girl she used to be, and Ben can't sort out the truth from the lies. What really happened, and who is to blame? Ben wants to help her, but she refuses to be helped. The more she pushes Ben away, the more he wonders if there's anything he can do to save the girl he loves.

This is the second book I've already read and the final one to talk about. It's a book about rape and rape culture, essentially. Firstly, I want to commend the author for writing an important, frightening book on an important, frightening subject. Not only is she a brave writer, but she also seems to be an incredible activist for rape survivors, which is amazing. But, for me, this book didn't work. I couldn't connect with the characters. And the writing style was odd - I don't know if I'm imagining it, or if it is maybe just slang, but sentences seemed a bit oddly constructed and just generally incomplete in places. The entire plot was slightly all over the place and repetitive, and maybe that's what the intention was, but for me it just didn't work.

So that's it for now! I have a lot of reading to do. Which of these have you read? Any more 2017 recommendations?

Posted by Exploration of Creation at 06:53