Today's post is going to be a recent haul of books. I ordered all of these from World of Books (an amazing website with free shipping, that sells second hand books at extremely affordable prices - these were all mostly under £3). Let me know what you've bought this month, or if you've read any of the books that I mention here! Let's get into this - hauls are my favourite posts/videos by far (I often find them much too inspiring). 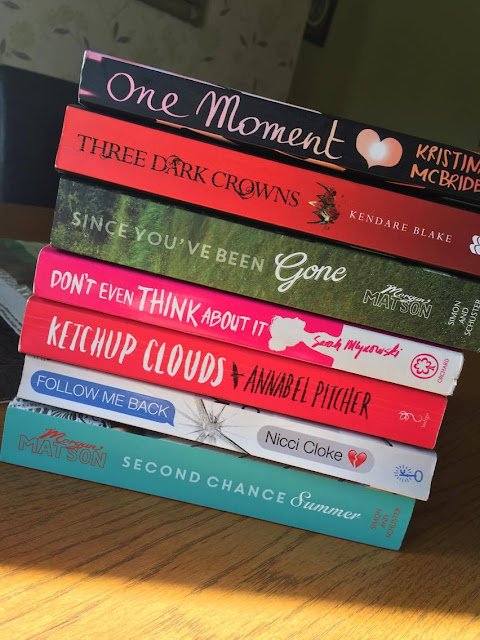 Taylor Edwards' family aren't close but when they receive some life-changing news they decide to get to know each other again, spending one last summer together at their old lake house. But Taylor is faced with the past she ran away from. Her former summer best friend is still living across the lake and still as mad with Taylor as she was five years ago, and her first boyfriend has moved in next door ...but he's much cuter at seventeen than he was at twelve. Can one summer be enough time to get a second chance - with family, friends, and love?

There was no sign of a struggle, they whisper to each other. She took her phone but left her laptop behind. Apparently, she'd met someone online, they write to each other in class, phones buzzing.
She ran away. She was taken.
The first time Aiden Kendrick hears about Lizzie Summersall's disappearance is when the police appear at his front door. He and Lizzie used to be friends; they aren't anymore. And when Aiden finds out that Lizzie had been talking to strangers on Facebook; that the police think she went to meet one of them, he begins to wonder how well he ever really knew her. Aiden doesn't know it yet, but with Lizzie's disappearance his life is about to take a twisted and desperate turn.

(This is the only one of these books I've read so far - I gave it 3.5 stars on goodreads, you can check out my review of it here.)

Fifteen-year-old Zoe has a secret - a dark and terrible secret that she can't confess to anyone she knows. But then one day she hears of a criminal, Stuart Harris, locked up on death row in Texas. Like Zoe, Stuart is no stranger to secrets. Or lies. Or murder. Full of both heartache and humour, Zoe tells her story in the only way she can - in letters to the man in prison in America. Armed with a pen, Zoe takes a deep breath, eats a jam sandwich, and begins her tale of love and betrayal.

(How intriguing does this sound! I think it has to be my next read.)

Sarah mlynowski’s don’t even think about it

When Class 10B got their flu shots, they expected some side effects. Maybe a sore arm. Maybe a headache. They definitely didn't expect to get telepathy. But suddenly they could hear what everyone was thinking. Their friends. Their teachers. Their parents. Now they all know that Tess has a crush on her best friend, Teddy. That Mackenzie cheated on Cooper. That Nurse Carmichael used to be a stripper. Some of them will thrive. Some of them will break. None of them will ever be the same.

(This sounds like it will be really good fun, I think. I've read [and loved] 10 Things We Shouldn't Have Done by this author and enjoyed it, so I've got high hopes!)

Morgan matson’s since you’ve been gone

Emily's best friend Sloane disappears, almost without a trace - the only thing left behind is a to-do list. On it, thirteen Sloane-inspired tasks that wallflower Emily wouldn't normally do, and definitely not without her best friend. But what if completing the list could bring Sloane back? Dance Until Dawn? Sure. Why not? Kiss a stranger? Um ...Go skinny dipping? Wait ...what? Emily only has the summer to check everything off Sloane's list. The question is, what will she find at the end of it?

(More Morgan Matson! This is definitely the novel I have heard most about from this author - I'm very excited to get reading!)

In every generation on the island of Fennbirn, a set of triplets is born: three queens, all equal heirs to the crown and each possessor of a coveted magic. Mirabella is a fierce elemental, able to spark hungry flames or vicious storms at the snap of her fingers. Katharine is a poisoner, one who can ingest the deadliest poisons without so much as a stomach-ache. Arsinoe, a naturalist, is said to have the ability to bloom the reddest rose and control the fiercest of beasts. But becoming the Queen Crowned isn't solely a matter of royal birth. Each sister has to fight for it. And it's not just a game of win or lose ...it's life or death. The night the sisters turn sixteen, the battle begins. The last queen standing gets the crown.

(I've been trying to branch out from just contemporary reads lately, whether that be historical retellings, fairytale retellings, fantasy, magical etc etc, and this fits that pattern! It sounds really interesting!)

It was supposed to be the best summer of Maggie's life. Now it's the one she'd do anything to forget. Maggie Reynolds remembers hanging out at the gorge with her closest friends after a party the night before. She remembers climbing the path hand in hand with her perfect boyfriend, Joey. She remembers that last kiss, soft, lingering, calming, perfect. So why can't she remember what happened next? All it takes is one second for everything to change. One moment to realise that it's the people you love who hurt you the most.

(I'm intrigued by the ambiguity of this blurb - wondering how dark this book is going to be. Also, it's described on the Waterstones website as "compelling, heart-breaking and unforgettable; this is the American Dream ripped apart" which just sounds bloody amazing, doesn't it?!)

So those are the books I picked up this month from World of Books. Amazingly, all seven of these came to around £20 - which is a complete bargain! I would highly recommend looking into buying books second hand from such websites, because you can save a small fortune and STILL buy plenty of books, which is pretty dreamy.

Posted by Exploration of Creation at 07:49