A Haul: My Birthday!

Today's post is another haul (two in a row, oops!) I just celebrated my 20th birthday, and I thought I would share with you all the books I received as gifts. Let me know if you've read any of these and what you thought, or about any books you recently bought/received yourselves! Hope you enjoy the read!! 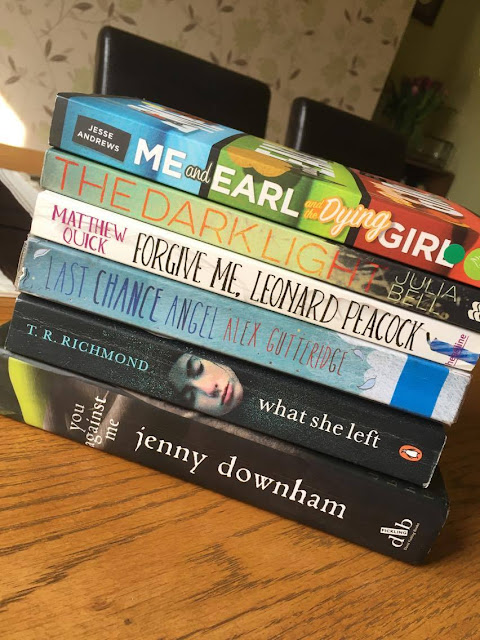 When Jess is knocked off her bicycle she finds her self at the gates of Heaven early - before her actual death date. Striking a deal with the angel on duty she is allowed to return to earth to visit her friends and family in invisible ghost form, until she's due back to the Pearly gates. But Jess soon learns more about her friends and family than she ever realised and ultimately she is faced with a real life or death dilemma.

(This gives me vague The Lovely Bones vibes [which I adored] so I'm really excited to read it.)

Jesse andrews’ me, earl and the dying girl

Greg Gaines is the last master of high school espionage, able to disappear at will into any social environment. He has only one friend, Earl, and together they spend their time making movies, their own incomprehensible versions of Coppola and Herzog cult classics. Until Greg's mother forces him to rekindle his childhood friendship with Rachel. Rachel has been diagnosed with leukemia - cue extreme adolescent awkwardness - but a parental mandate has been issued and must be obeyed. When Rachel stops treatment, Greg and Earl decide the thing to do is to make a film for her, which turns into the Worst Film Ever Made and becomes a turning point in each of their lives. And all at once Greg must abandon invisibility and stand in the spotlight.

(I've heard some seriously amazing things about this book, and I'm also wanting to watch the film but, as ever, I have to read the book first!)

t.r. richmond’s what she left

Alice Salmon young, smart, ambitious - with her whole life ahead of her. Until the night she mysteriously drowns. Nobody knows how or why. But Alice left a few clues: her diary, texts, emails, and presence on social media Alice is gone but fragments of the life she led remain - and in them might lie the answer to what really happened to her - if only someone can piece it all together before it vanishes for ever...

(This one sounds very intriguing - apparently recommended for fans of Gone Girl and The Girl on the Train, both of which I enjoyed, particularly the former.)

Rebekah has lived on the island her whole life, and it's only now that she's starting to wonder what she might experience outside her strict religious community. Alex has been sent to the island to escape her dark past, and through her eyes it's a dark and sinister place. Thrown together by chance, Rebekah and Alex strike up an unlikely friendship and it's together that they attempt to break free of their worlds and make a world of their own. But when a kiss between the girls is witnessed by an islander there is no escape they can make - the Rapture is coming for them all.

(I don't think I've ever read anything like this before and I'm absolutely fascinated by the premise!)

Jenny downham’s you against me

When Mikey's sister claims a boy assaulted her, his world begins to fall apart. When Ellie's brother is charged with the offence, her world begins to unravel. When Mikey and Ellie meet, their worlds collide.

(This sounds like a really interesting take on a sexual assault story. I'm interested to see how a different author deals with a topic I have read a lot around in the past year or so.)

How would you spend your birthday if you knew it would be your last? Eighteen-year-old Leonard Peacock knows exactly what he'll do. He'll say goodbye. Not to his mum - who he calls Linda because it annoys her - who's moved out and left him to fend for himself. Nor to his former best friend, whose torments have driven him to consider committing the unthinkable. But to his four friends: a Humphrey-Bogart-obsessed neighbour, a teenage violin virtuoso, a pastor's daughter and a teacher. Most of the time, Leonard believes he's weird and sad but these friends have made him think that maybe he's not. He wants to thank them, and say goodbye.

(I have a feeling this won't be too similar to the normal type of book I pick up, but it sounds like it has the potential to be something quite special and I'm looking forward to reading it.)

Posted by Exploration of Creation at 03:27