Today's post is going to be about the books that I've bought this month. These are from a variety of places (mainly eBay sellers and supermarkets, where you can get books for less then half of their retail price). I've actually been fairly restrained this month, having been distracted by revision and exams, but no doubt during summer the book spending will be amped up. Hope you enjoy the read! If you've read any of these, let me know what you thought. What books have you bought this month? 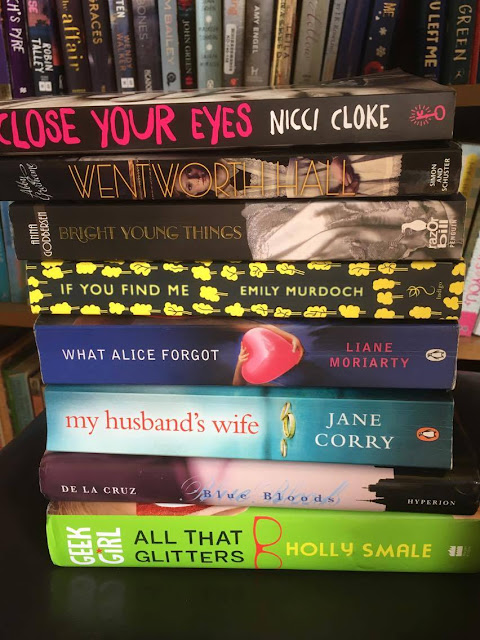 "Southfield High School is oh so normal, with its good teachers, its bad, and its cliques. But despite the cliques, there's a particular group of friends who have known each other forever and know that they can rely on each other for anything. But at the start of Year 11, when the group befriend the new boy, Elijah, things start to change. The group find themselves not as close as they used to be. Until one Tuesday, when the students are trapped inside the school building. And one of them has a gun."

"Wentworth Hall is one of England's oldest estates and the Darlingtons are among the elite class of British society. But under all that wealth, there are secrets they do not want told. When scandalous satires start appearing in the newspaper with details suspiciously similar to the goings on of Wentworth Hall, the Darlingtons are determined to keep their secrets to themselves and the affairs (both private and public) in order. And the first order of business is finding the culprit. But where to start? Downstairs? Or Upstairs?"

"It's 1929 and Letty Larkspur and Cordelia Grey have escaped their small Midwestern town to chase big dreams and even bigger secrets. Amongst the glittering metropolis of New York City, they meet Astrid Donal, a flapper who has everything she could ever want, except for the one thing Letty and Cordelia have to offer-true friendship. Set in the dizzying summer before the market crash, against the vast lawns of the glamorous Long Island mansions and on the blindingly lit stages of Broadway, three girls will find scandal, intrigue, and romance..."

Emily murdoch’s if you find me

"What happens in the woods, stays in the woods... For almost as long as she can remember, Carey has lived in a camper van in the heart of the woods with her drug-addicted mother and six-year-old sister, Jenessa. Her mother routinely disappears for weeks at a time, leaving the girls to cope alone. Survival is Carey's only priority - until strangers arrive and everything changes..."

"Alice can't remember the last ten years of her life. She doesn't recognise her children, her husband, herself... This is her life but not as she knows it. Clearly Alice has made some terrible mistakes. Just how much can happen in a decade? Can she ever get back to the woman she used to be?"

"When lawyer Lily marries Ed, she's determined to make a fresh start. To leave the secrets of the past behind. But when she takes on her first criminal case, she starts to find herself strangely drawn to her client. A man who's accused of murder. A man she will soon be willing to risk everything for. But is he really innocent? And who is she to judge?"
[ALREADY READ THIS: Nowhere near as good as it sounds like it would be!!]

"Fifteen-year-old Schuyler Van Alen has never quite fit in at her exclusive prep school - she's more of a vintage than a Versace girl - but all that's about to change...Because Schuyler has just found out she's a Blue Blood. The Blue Bloods are the city's glamorous - and secret - vampire elite. They're young, beautiful and powerful. But now they're being murdered. And Schuyler must find out who - or what - is behind it before she's next."

Holly smale’s all that glitters
"Harriet Manners knows many things. But she knows nothing about making new friends at Sixth Form. Or why even her old friends seem to be avoiding her. And she knows even less about being a glittering supermodel success. Which she now is - apparently. Has Harriet's time to shine like a star finally arrived, or is she about to crash and burn?"

That's it for this month's haul!! Time to get reading now.

Posted by Exploration of Creation at 06:00