A Review: Angie Thomas's The Hate U Give

Today's post is going to be a review of one of the best books I've read in 2017 so far. Angie Thomas' The Hate U Give has received incredible hype, all of which it totally deserves. The story is essentially following the theme of police shootings of unarmed black Americans, and the subsequent Black Lives Matter movement. Not only did I find myself educated by reading the book, but I also felt incredibly emotionally engaged. 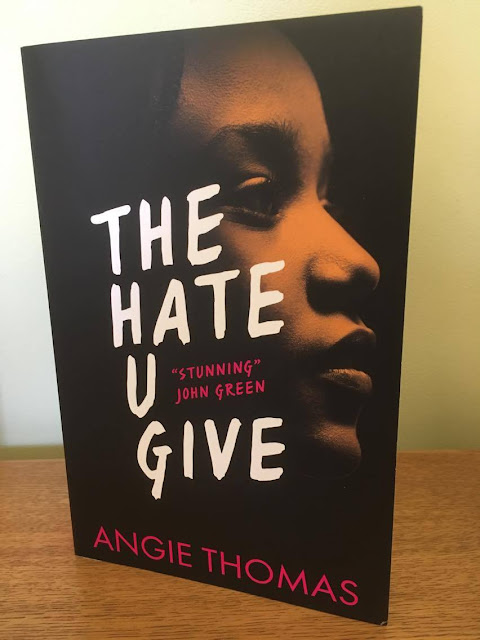 "What's the point of having a voice if you're gonna be silent in those moments you shouldn't be?"

The narrator of The Hate U Give is called Starr; she's a teenage girl, living in a predominantly black area, going to a predominantly white private school. After a party one night, her best friend Khalil is driving her home when they get stopped by a police officer, who goes on to shoot Khalil (who was unarmed and calm). This event happens incredibly quickly in the narrative (I think within the first 20/30 pages) and the scene is one of the most powerful I've read. The rest of the novel follows Starr dealing with the repercussions of this night; grief, media attention, tensions with friends and her boyfriend.

One of my favourite things about Starr's narrative was how wonderfully, and surprisingly, funny her voice was. I suppose I was expecting the entire story to be very serious and impactful (which it was) but Starr was one of the most genuinely funny protagonists I've ever read. Particularly the depiction of Starr's parents and brothers - they are just such natural, subtle, effortless characters with vivid, realistic relationships and hilarious interactions.

I found the exploration of romantic relationships (Starr and Chris, in particular) to be incredibly well-written, mainly because it was so subtle. I really enjoyed the fact that it was an already-established relationship - rather than them meeting for the first time during the novel - because that meant the focus wasn't on them as a couple, and instead on Starr as an individual. I've read some criticism of Starr's inner turmoil about Chris being white and I just find those arguments bizarre - Starr is never racist towards Chris!! She is merely struggling with the concepts of race and love and loyalty, and how they all fit together in her life. To suggest that this makes her racist, and thus the book hypocritical, is utterly ridiculous to me.

"A hairbrush is not a gun."

The depiction of what is essentially the Black Lives Matter movement was incredibly interesting and emotive. I have found myself in real life wanting to educate myself in the matters of police brutality, but it is very difficult to truly connect with such a horrific situation without being a part of it in someway. Reading The Hate U Give gave me huge insight into the terrifying, unfair, fury-inducing reality that black teenagers (particularly in America right now) face. When the police officer in question is not charged, believe me, you will feel every bit of the anger and hurt and fear that Starr and Khalil's friends and family do.

"...People make mistakes, and you have to decide if their mistakes are bigger than your love for them."

To conclude, this was absolutely one of the best books I've read this year, and in terms of a social justice issue-read, one of the best I've ever read. It is such a current topic, so relevant and vitally important for EVERYBODY to understand and engage with. I would recommend this book to ANYBODY. You will definitely laugh, probably cry and without a doubt, you will love Starr, you will love her world, you will grieve for Khalil and you will wish for a better world.

"Sometimes you can do everything right and things will still go wrong. The key is to never stop doing right."

Posted by Exploration of Creation at 03:33