Today's post is an unhaul - as you may know, if you're a regular reader here, I like to de-stash my books every once in a while, donating anything unwanted by me to charity, so that it can go to a more appreciative reader and make some money for a good cause in the process. I'd really recommend doing the same with your unwanted books, too! Anyway, here's the books I'm sending off to a new home this time around... 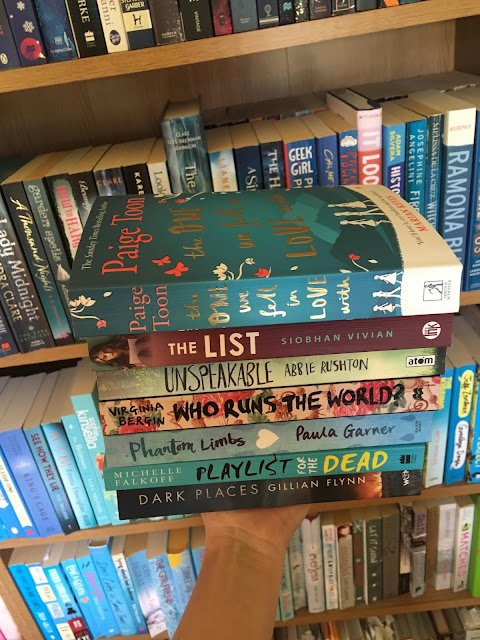 Dark Places by Gillian Flynn is a book I DNF-ed at around 30-40%. It's such a shame, because the other two thrillers by Gillian that I have read have been really great, but this had none of that spark or tension or interest for me. I looked up the twist online after deciding not to continue and it was kinda crappy, sorry!!
Playlist for the Dead by Michelle Falkoff was a book that I thought was really going to delve into the topics of depression and teenage suicide, but it really doesn't do that enough at all, in my opinion. Instead you get this kind of annoying male protagonist, who whines about the girl he fancies for 300 pages.
Phantom Limbs by Paula Garner is probably one of my most disappointing reads of the year so far - the main issue I had with it was its protagonist, who spent the entire novel obsessively describing the shape of girls' bums and boobs - awfulness.
Who Runs the World by Virginia Bergin was this awesome-sounding YA dystopian, focused on a women-centered world that I imagined would be some kind of feminist loveliness. Alas, not so much. I actually found it incredibly dull and the world-building felt lacklustre to me.
Unspeakable by Abbie Rushton has been on my unhaul pile a few times since I read it last year, but I've always saved it at the last minute genuinely only because it's so pretty to look at. I really hoped that the lesbian relationship would be central to the book's plot, but it wasn't and Jasmine seems unfairly idolised by every single character.
Siobhan Vivian's The List is another book I've been meaning to donate for a while now. It had the potential to do a lot for feminism, tackling topics of bullying, comparing girls to one another and superficial judgements - unfortunately, it does none of this successfully.
Paige Toon's The One We Fell in Love With was a letdown. Considering Angus is at the centre of these three sisters and their war over him, he is so un-charming - I spent most of the book wondering what in the world they all saw in him!!

So those are the books I'm donating this month and why. If you've read any of these, let me know what you thought of them, down below in the comments section!

Katie
Posted by Exploration of Creation at 04:56