A Review: Emma Mills's Famous in a Small Town

Today's is the final Emma Mills review (at least, until she writes another book, which in 99% sure I'll also adore and subsequently write a review of) and it is of her most recent release (2019, in fact) Famous in a Small Town. In terms of favourites, I'd say this is probably number four of four, but it was still absolutely brilliant. 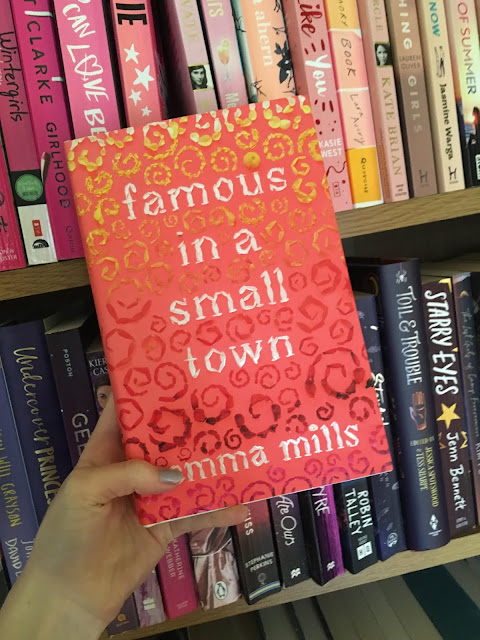 For Sophie, small town life has never felt small. With her four best friends--loving, infuriating, and all she could ever ask for--she can weather any storm. But when Sophie's beloved Acadia High School marching band is selected to march in the upcoming Rose Parade, it's her job to get them all the way to LA. Her plan? To persuade country singer Megan Pleasant, their Midwestern town's only claim to fame, to come back to Acadia to headline a fundraising festival.
The only problem is that Megan has very publicly sworn never to return.
What ensues is a journey filled with long-kept secrets, hidden heartbreaks, and revelations that could change everything--along with a possible fifth best friend: a new guy with a magnetic smile and secrets of his own.

"But everyone changes. The way you feel about people changes. Same goes for places, I guess."

The Megan Pleasant story did something similar here to the lost painting plot in This Adventure Ends, I think, in terms of propelling the narrative forward, giving the protagonist a sense of purpose and basically just providing some breathing space between the two main themes of the story; romance and friendship. I loved the little twists and turns that came about towards the end of this particular plot-line though, because I really wasn't expecting them. I also loved the plot twist that came with the  Ciara storyline; these happen so rarely in YA contemporaries, and it always feels like an incredible moment when they do.

"I regret to inform you that you're stuck with me. And that I love you."

Something that I liked about the romance here that set it apart from Emma's previous romantic relationships was that, at least to begin with, it certainly felt that Sophie was more invested than August, whereas previously it's felt like the male counterpart was in that position. I liked the kind of quiet attraction Sophie described herself as feeling though, and that she wasn't pushing or chasing. I think that the way Emma Mills writes about first love is one of the most special things about her writing; these experiences her characters go through always feel cherished, sometimes a little bit uncomfortable, and very, very real.

"We were the Pride of Acadia, and no one was prouder than me."

In fact I think Sophie herself was a really fantastic protagonist. She had this real sense of restlessness and anxiety about the future and connection to home that felt so relatable; I liked that her nerves and focus were on what she was potentially leaving behind rather than what she was potentially moving towards, because I think most "going off to university" storylines do the opposite.

"Or maybe - maybe, maybe - the people around me were more than I was capable of imagining, contained more to them than I could fathom. Everyone had little pieces they kept to themselves"

Once again, the friendship group in this book was written to perfection. It amazes me that Emma Mills has now written four books, all with pretty large friendship groups/casts, and yet I never read a new character and think "oh, she/he is just a knockoff of her/him"; instead they are always new and unique and interesting. There was some really good tension in the friendship between Sophie and Brit, partly because of how much they love each other and partly because of how completely different they are. Brit's casual, and at times brutal, honesty & self-confidence was really refreshing to read, even if at times she felt a little selfish or frustrating; this just made her more real, I think. I also felt like it was realistic that Brit felt cautious about letting August become a part of their special friendship group, rather than just accepting, without question, and with open arms. That special moment, right at the end of the book, where Sophie catches Brit looking at Flora in a certain way is so beautiful and I think placing it at the very end of the story, with a suggestion of "what happens next" was perfect.

So, yes, overall, I just can't say enough nice things or use the words gorgeous & real & beautiful enough. I feel like every review I've written of an Emma Mills book has just been a mess of love and appreciation. Just go and buy her books and read them - you can thank me later!

Posted by Exploration of Creation at 09:29