A Review: David Levithan's Every Day & Another Day

Hi,  thanks for stopping by.

Before stumbling across these two books in my local library, the only writing I had experienced of David Levithan's was his co-authored novel, Dash and Lily's Book of Dares. Whilst I found the concept of that story incredibly creative and cool, and Dash and Lily themselves were quirky and fun to read about, it just didn't connect that much with me. So, admittedly, I was kinda hesitant to pick these two up. But, as they were there together, I figured I'd give them a shot. And boy am I glad I did. I will absolutely be buying both of these books, so that I have my own copies to love and re-read! 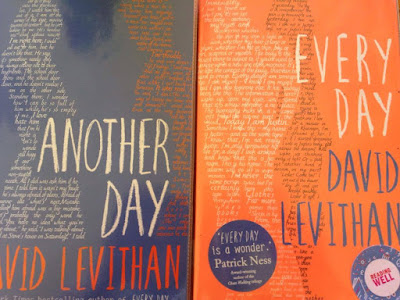 (How annoying that I photographed them the wrong way round - face-palm moment.)

Yes, the concept is as bizarre and amazing as it sounds. A wakes up in a different person's body every single morning, is never the same person twice and doesn't have any information about why. I just want to say now, throughout this review I will probably slip-up and refer to A as 'he' or 'him' which is bad really, because it's made quite clear throughout that A is essentially genderless. And the whole point of A's character, I think, is to prove how meaningless stuff like gender and appearance should really be in terms of life, especially love. So, if I do refer to A as a guy, please roll your eyes and ignore me. It's accidental, I promise.

“I wake up thinking of yesterday.”

One of the things I really loved about this book was the moments that had nothing to do with A and Rhiannon at all. The beauty of A's "lifestyle" (is that even the right word for it?!) is that you get to meet and explore so many different characters. It's only for chapters at a time, but that's sort of enough. No time to get sick of them or question motives or pick apart their lives, just a glimpse. Certain characters I did want to stay with, though. I want to know whether Kelsea got better, I want to know how certain relationships and friendships are getting along, I want to know if characters made up with their families or ended up getting to Hawaii. There were so many subtle, blended storylines and I loved them all. I also thought the additional plot revolving around Nathan's "devil possession" story was a great addition that added more light and shade to the story as a whole. To pack so much into a story and have none of it be unnecessary is a wonderful skill that David Levithan has in buckets.

“If there’s one thing I’ve learned, it’s this: we all want everything to be okay.”

For me, I have to admit that the only thing keeping this from 5-Star status was the ‘romance’ between A and Rhiannon. I think maybe I’m being a little hard on her, because let’s be honest it doesn’t get much stranger or harder than trying to be with someone who is literally a different person every single day, but I just didn’t believe in her character all that much. I suppose what I’m trying to say is, I don’t quite understand what the big deal with her was for A, although I did totally believe in his character, even if I didn't get his thought process entirely. I’m not 100% convinced. However, it had a fairly small effect on my feeling towards the book, which I still gave a hearty and deserved 4.5 stars.

“Because when something happens, she’s the person I want to tell. The most basic indicator of love.”

I really loved the ending of this book, although it did physically hurt a little. If you don't want spoilers, please look away now! I didn't see it coming - in fact, if I'm being honest, I was predicting that A would somehow magically find a way to get transported permanently into Justin or Xavier's body and be with Rhiannon that way. I am so unbelievably glad it didn't go in that direction. Picking out a good person for her, making sure Alexander's life would fit with Rhiannon's and creating a perfect first date memory for Alexander to share when he's back in his own body was just the most incredible thing for A to do. Super selfless and powered by his love for Rhiannon. A beautiful end to a beautiful book.

“It takes uncommon strength to live with these things. But I have seen that strength over and over again.”

Now for Another Day, the same story, over the same time period, but told from Rhiannon's perspective. Having read Every Day, I was so glad I picked this book up, too, because I wanted to get to know her better and see if it changed my initial thoughts and feelings towards her character. And, thankfully, it did! She still isn't my favourite female protagonist ever, but I did feel I connected with her far more after getting inside of her head. There were moments where I felt so, so sad for her. I could almost, only maybe one or two occasions, begin to understand why she loves Justin so much (the Girl Scout cookie scene was bloody adorable and the moment, post-breakup, when he kinda desperately asks her  'why' which made me see how much he did truly care). But, for me, something that held this book back from five stars was a lack of understanding of Rhiannon and Justin's relationship for the most part. He treated her like she was essentially nothing for about 80% of their time together and at times I just found myself wanting to scream at her. If the love story of the book had been theirs, this would be getting a real low rating. But, thank goodness, A saves the day once again.

I want to give a small shout-out to Rebecca's character who was funny and fierce and never put up with any of Justin's bullshit - I really appreciated her influence (no matter how much Rhiannon ignored her) and thought she was a really significant character, although she wasn't give too much of a spotlight.

"No matter how hard you try to keep hold of a day, it's going to leave you."

Something else I really appreciate was Rhiannon's honesty about herself, her thoughts, her flaws. She wasn't this perfectly PC protagonist that a lot of books feature. Throughout her narrative she was constantly stating and questioning the idea of identity and attraction; she explicitly said numerous times that whilst she knew love should prevail over gender, appearance, sexuality and so on, she couldn't convince herself of that when it came to her own life. She admits that she pictures A as a tall, straight guy who is far from perfect but is slim, handsome, male and into girls, nothing else. Her exploration of how she can be in love with someone who is one day transgender, the next day, the next obese, the next an illegal immigrant is so thought-provoking. I think it shows the strength of personality, of charisma, how love is possible without vanity but it also challenges those ideas and reveals that whilst that might be a perfect world, where nobody is judged on what they look like or who they choose to love, it's just not the world we live in.

"My life changes all the time, but books don't change ...  the world is a place you've been before, and it welcomes you back."

Posted by Exploration of Creation at 08:21