A Review: Jandy Nelson's I'll Give You The Sun 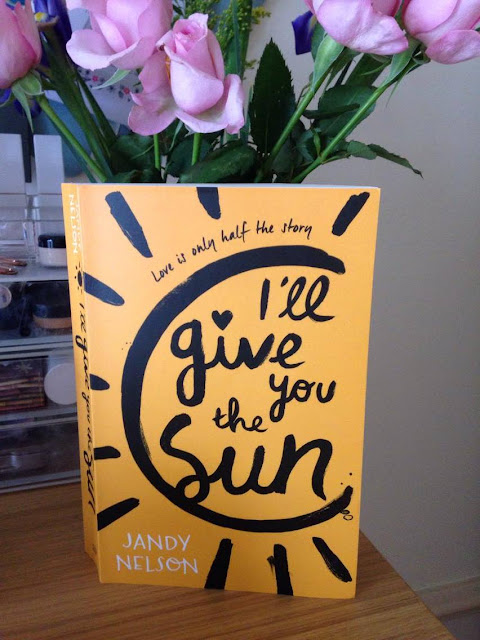 Jude and her twin Noah are close until a tragedy drives them apart. Now they are barely speaking - and both falling for boys they can't have. Love's complicated.

I’ll be honest, having read and adored The Sky is Everywhere, I really expected I’ll Give You The Sun to be a let-down, or at least an anti-climax, in comparison. I was so, so wrong. I don’t know if I’ll quite go as far as to say it has surpassed TSIE, but it is certainly on a completely even level. There is something magic about Jandy Nelson’s storytelling and especially her depiction of life, and the ways in which family, friends and love lighten up the world around us. She certainly never shies away from the darker corners of the universe – in fact her handling of grief, in particular, as a topic is so, so excellent – but she also manages to bring light, or in this case sunshine, to them.

(P.S., now having read the book and understanding where the title comes from, I love it even more!)

“His soul might be a sun. I’ve never met anyone who had the sun for a soul.”

Something that constantly blind-sighted me (in an amazing way) throughout the reading of this novel was the way in which my sympathy switched between Jude and Noah at all times. When I read Noah’s first chapter, I thought, right, that’s it, he’s the twin for me, Jude can never compare. And then Jude’s first chapter came and I found myself thinking quite the opposite. Throughout, the twins do some pretty awful stuff to one another, and yet can still be utterly sympathised with, although perhaps never excused. For me, that’s some sort of mastery of storytelling, to have your reader so caught up in your characters and their lives that they can never quite decide who they like best. I feel as though Jude was certainly more likeable as a late teen and Noah as a pre-teen, but that was what Jandy was going for, I’d assume. However, even with Jude as a younger girl and Noah as a near grown-up, they were still loveable, just in different, more complex ways.

I also want to commend the ways in which Jandy wrote about Noah coming to terms with his sexuality and falling in love for the first time, with another boy. My only slightly confusion in the entire story was that when Noah was writing as a 13 or 14 year old, I felt he was a lot older in the way he spoke, felt and acted, more of a 16 or 17 year old. But I guess he’s just emotionally mature and intelligent, and I’m cool with that! The way Noah fell in love with Brian was one of the most heart-warming examples I’ve read in YA fiction and I was SO rooting for him. The couple of indiscretions, where Brian is clearly trying to deny or fight his own sexuality, made my heart hurt enormously, for Brian too, but mainly for my poor Noah. When they held hands in the cinema, I just couldn’t even contain my joy for Noah (again, yes, I am aware it’s just a story, but he’s so adorable).

“What is bad for the heart is good for art.”

Time to talk about our second love interest. Oscar. Where to begin… I’ve spoken on this blog about Finch, Joe, Levi... It’s time to put Oscar right up there in the top pile. He is wonderful. Admittedly, a little less nice guy than Joe from The Sky is Everywhere, but just as artfully, gorgeously written and developed by Jandy. I can’t help but agree with his mother – Jude really does seem to be made for him and vice versa. That moment when she’s hidden in his room and he brings another girl home just broke me. (P.S. I love the fact that he’s British and all the love for British people that Jandy includes in the story through Jude’s relationship with him – rightly so, of course!) I love how Oscar, at the end, tries to do the honourable “I’m too old and bad for you” thing, and after like a couple of retorts and a kiss from Jude, he’s just completely won over. Another hilarious part for me was when Jude is talking to her grandmother (who is dead, but she often has conversations with), having a right rant about Oscar, and he’s stood behind her listening to the whole thing, including her gushing about how sexy he is. It’s just such a brilliant, brilliant scene.

I couldn’t quite believe on how many occasions I hurt for these characters, I laughed with them, felt shock, anger, hurt, warmth, love.

“Reality is crushing. The world is a wrong-sized shoe. How can anyone stand it?”

I’m not going to deny it, I did miss Lennie’s divine poems throughout the narrative, because that was one of my absolute favourite elements of The Sky is Everywhere. However, I did love the inclusions of painting titles (Noah) and superstitious remedies (Jude) which just as easily described state of mind and emotion throughout the chapters. I think these are such cool, quirky little elements that Jandy expertly weaves throughout the narrative, which work well to break it up a little and blend it, too.

“No one tells you how gone gone really is, and how long it lasts.”

Noah and Jude’s relationship with one another is wonderfully complex. Although we don’t really get much exploration of them when they were super close, it’s still very easy to imagine and infer. Their conclusion, as brother and sister, was the one I was looking forward to most, and felt so, so content with.

“This is what I want: I want to grab my brother’s hand and run back through time, losing years like coats falling from our shoulders.”

Their relationship with their parents was also really interesting to me. The way they were so competitive when it came to their mum, and their heartbreak when they discover how she’d been living her life. Some of the best moments for me though are between Noah and his dad. When he seems to finally accept him for the boy that he is – rather than the one he’d ideally like him to be – Noah’s joy is palpable, and when at the end of the book he sees Noah and Brian together, holding hands, and realises he’s gay, he just kind of goes “oh, I get it, that makes so much more sense than him being straight”, which I thought was kind of a wonderful reaction in so many ways, but also not too idealised and therefore far more real and believable.

I cannot quite put into words how much I loved this book. Or talk about all the tiny details that I loved, because this blog post would be seven pages long, and I already write too much as it is. I just know that when I put it down, I wished I hadn’t read it yet, so I could start it all over again and have that experience twice. It’s definitely going to be one I re-read and re-read. For me, I think Jandy Nelson might be my favourite author of 2016, simply because both of the books I read by her this year have been absolutely stunning and pretty close to perfect in my eyes. As someone who writes both as a hobby and as part of my degree (and who wants to do it in the future as a career, too!), if I could write like anybody – apart from, of course, coming up with Harry Potter, JK Rowling-style – I think it would be like Jandy Nelson. I want to create people and relationships and stories like she does, because she’s so bloody good at it.

“Quick, make a wish. Take a (second or third or fourth) chance. Remake the world.”

Posted by Exploration of Creation at 03:59