Today's post is really weird for me, because instead of showing the books I've bought, I'm showing the ones I've decided to take to the charity shop this month. I'm excellent at book shopping, less so at voluntarily giving books up. But lately I've been buying so many books and really taking good care of them, organising them on my rainbow shelves, and on numerous occasions I've looked at certain books and thought "why do I even still have that". On top of that, I've seen so many bloggers and Youtubers clearing out their shelves, so I'm in good company! 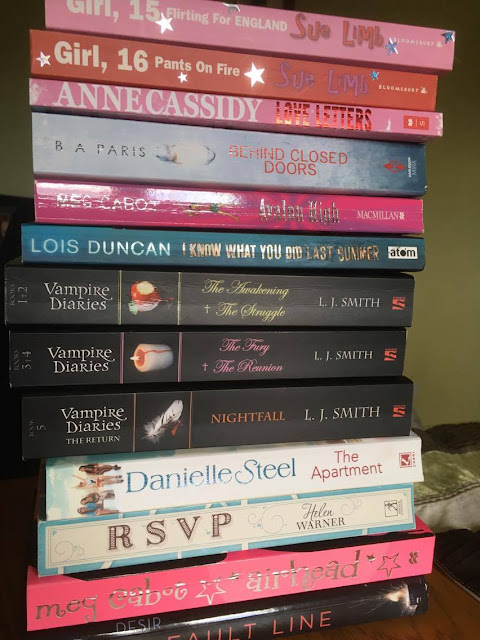 I've had these books for such a long time (I think I read them when I was 13/14!) I remember absolutely loving them at that time and thinking they were hilarious. But I know for sure that I will not read this again now, and I'd rather somebody else enjoy them! I think they're more suitable for a slightly younger audience, from what I remember, although I guess they're classified as YA - maybe it's just because they were written a while ago, they don't feel like the contemporaries that I'm a fan of these days.

It wasn't even that long ago that I bought this book, because I thought the premise sounded really creepy and intriguing. In reality it was quite poorly written, in my opinion, and lots of the content was just melodramatic and cringey. Again, maybe it's a matter of age. Hopefully somebody else will be able to get more enjoyment out of it than me!

I think this book is one I should have known better about, really. I don't mind thrillers, in fact I quite enjoy a darker story, but I really do feel the difference between a YA thriller and an adult one. Usually, either can be great, but in this case this was far too dark for me. The actual domestic thriller premise was obviously expected so that wasn't what unsettled me, it was more the relationship with the protagonists' younger, incredibly vulnerable sister - I actually felt physically uncomfortable whilst reading those parts of this story. It's really not for me at all.

Again, this is a book I've been keeping out of nostalgia rather than genuine interest/likelihood to reread. I really, thoroughly enjoyed reading this as a younger teenager, but right now it's taking up such valuable space on my shelves! I did the same with the Princess Diaries series a couple of years ago.

Lois duncan’s I know what you did last summer

I never watched the horror movie made out of this book, and I don't know if I'd bother to after reading the original story, to be honest. I feel like the plot had so much potential but the characters were so bland and flat and the tension of the mystery element just fell flat in turn. If anybody knows books with a similar premise which really are awesome, PLEASE let me know!!

l.j. smith’s the vampire diaries (1-5)
I really did try to get into this book series, because I love the television show so, so much (in fact, I'm currently rewatching the whole thing on Netflix!). I know that as a reader before a watcher, I should be loyal to the original story/characters from the book, but I just can't!! Everything in the books is different! I'm pretty sure Elena is blonde, Caroline is a redhead, and hair colours aside, doesn't Elena become a vampire like straight away in the books?! BAFFLING. I'll stick to the Ian Somerhalder version, thanks.

To me this book sounded like it would be really, really cool - 4 girls living in New York City together,  with friendship, careers, romance, drama etc etc. In reality, it was one of my least favourite books I've this year (possibly entirely). It was just so melodramatic and unrealistic, with people falling in love and getting engaged within two pages of meeting each other. Besides that, every single relationship had some huge firework-worthy breakdown with engagements, cheating, babies in every single one! I really didn't enjoy it at all, and didn't connect with a single character really - hopefully somebody else prefers it!

I read this book most recently of all of these, and I really wasn't a massive fan. There was nothing terrible about it, but nothing all that great, either. I didn't connect with any of the characters, a lot of the romantic relationships were incredibly rushed and unrealistic and the whole "will they get married won't they get married" tension-building storyline was concluded before halfway through the book, despite being the entire premise of the blurb/description. Not for me, I'm afraid.

This was definitely my favourite Meg Cabot book that I ever read, but yet again it isn't one I'll be reaching for for a reread. It was a really cool, original concept and I just absolutely know it's a book that somebody will thoroughly enjoy reading for the first time.

Now this is another book I got really quite recently and it was one I had such high hopes for. I've been really interested in reading around the topic of rape culture ever since I read Louise O'Neill's astounding Asking For It, but for me this really fell short. Perhaps my expectations were too high. I just really did not enjoy the reading experience at all, and not because of the difficult subject matter (clearly I was ready for that and what comes with it) but just generally the book was a bit of an uncomfortable, strange read for me.

So that's it for now!! As brave as I can be for April, but I will continue to do these clear outs (mainly because I'll have no other option with the amount of books I've been buying lately). What books have you gotten rid of this month? Have your read any on my list, and if so, did you like them?

Posted by Exploration of Creation at 06:04