This week, my mum and I discovered an awesome book store (kind of) just half an hour away from where we live. It's called Bookbarn International and is essentially just a huge barn, full to bursting with secondhand books for sale. As you can imagine, I had a great time exploring it, and these are the things I bought! This is their website if you want to check it out or maybe make a visit someday - I think you can buy books online for very reasonable prices, too, but in the actual barn, paperbacks were £1 each! Hope you enjoy reading - let me know if you've read any of these and what you thought. 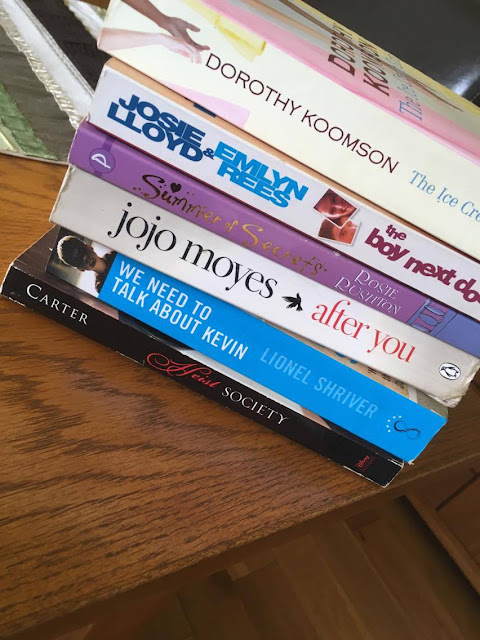 When Katarina Bishop was three, her parents took her to the Louvre...to case it. For her seventh birthday, Katarina and her Uncle Eddie travelled to Austria...to steal the crown jewels. When Kat turned fifteen, she planned a con of her own - scamming her way into the best boarding school in the country, determined to leave the family business behind. But now her dad's life is on the line, and Kat must go back to the world she tried so hard to escape...

Lionel shriver’s we need to talk about kevin

Eva never really wanted to be a mother; certainly not the mother of the unlovable boy who murdered seven of his fellow high school students, a cafeteria worker and a teacher who tried to befriend him. Now, two years later, it is time for her to come to terms with marriage, career, family, parenthood and Kevin's horrific rampage in a series of startlingly direct correspondences with her absent husband, Franklyn. Uneasy with the sacrifices and social demotion of motherhood from the start, Eva fears that her alarming dislike for her own son may be responsible for driving him so nihilistically off the rails.

Jojo moyes’s after you

Here is Lou, 18 months on from the death of Will, the man she was caring for and fell in love with in the first book, living in a flat she’s bought with the money he bequeathed her and doing absolutely nothing. Her bubbly, life-loving attitude has vanished, replaced with an existence filled by a dead-end job at a bad Irish pub at City Airport, a grief therapy group, and drinking wine on the roof of her building, from where she tumbles to meet her new fate. If Lou initially hopes her fall has left her paralysed, Moyes swiftly rejects her heroine’s desire for comfort in suffering as Will did, instead giving Lou a new love interest in the form of paramedic Sam and the possibility of a fresh start in New York.

Caitlin Morland has always craved excitement and been well aware that she wasn't going to find it with her boring family. When she wins an art scholarship to the famous Mulberry Court College, she is delighted to find herself embraced with open arms by Queen Bee, Izzy Thorpe, daughter of a prominent politician and her mates, Bianca Jarvis and Summer Tilney - girls with lifestyles a million light years away from her own. She is dragged unprotesting into a round of scams, parties and panics and falls madly in love with Summer's brother Ludo...And then there is an invitation to go on holiday with Izzy's family and that is when everything, thanks to Caitlin's over active imagination, starts to go horribly pear shaped.

When they were young, Fred and Mickey thought that nothing could tear them apart. They were wrong. Now, Mickey is a single mother, and Fred is on the verge of getting married. But when they see each other for the first time in fifteen years, they'll discover what happens when true love hits close to home.

As teenagers, Poppy Carlisle and Serena Gorringe were the only witnesses to a tragic event. Amid heated public debate, the two seemingly glamorous teens were dubbed 'The Ice Cream Girls' by the press and were dealt with by the courts. Years later, having led very different lives, Poppy is keen to set the record straight about what really happened, while Serena wants no one in her present to find out about her past. But some secrets will not stay buried - and if theirs is revealed, everything will become a living hell all over again...

So these are the glorious bargains I got! I was particularly chuffed with After You and The Ice Cream Girls, as they've been on my TBR for ages and are definitely books I'd have ended up buying full price. What bargains have you bought recently? What's your favourite bargain book shop? I'd recommend online retailers such as The Works, The Book People and World of Books. Also, Ebay and Amazon can be great for bargains, too!

Posted by Exploration of Creation at 05:24