Today's post is yet another haul... something about being off from uni for the summer seems to add up to ten times the amount of book shopping. The last four books in this haul were bought for super cheap prices from online stores like World of Books, but the rest are actually from WHSmith for a change, because I had some vouchers, and they had great 3 for 2 offers on, so watch out for those over the summer! 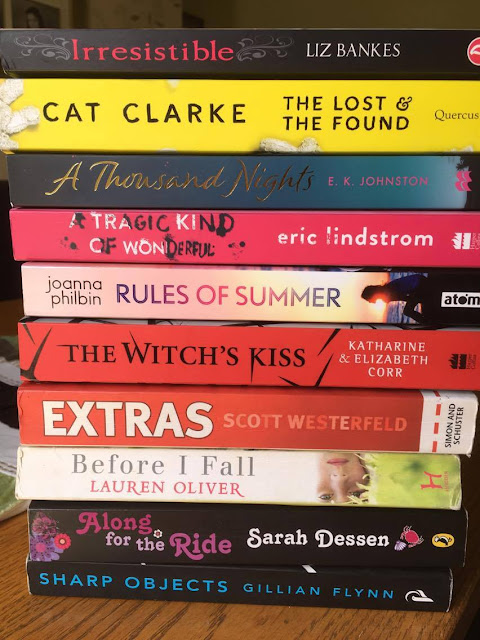 Mia's new summer job at a posh country club is hard work, but fun, especially when a romance develops with hunky Dan. But Mia is drawn to Jamie too - sexy, rich and bored, he's got everything he could ever want, but gets his kicks messing with people's lives. Even though Mia knows that getting involved with Jamie is a bad idea, there's something so dangerously exciting about him, she just can't resist.

Cat clarke’s the lost & the found

When six-year-old Laurel Logan was abducted, the only witness was her younger sister, Faith. Faith's childhood was dominated by Laurel's disappearance - from her parents' broken marriage and the constant media attention to dealing with so-called friends who only ever wanted to talk about her sister. Thirteen years later, a young woman is found in the garden of the Logans' old house, disorientated and clutching the teddy bear Laurel was last seen with. Laurel is home at last, safe and sound. Faith always dreamed of getting her sister back, without ever truly believing it would happen. But a disturbing series of events leaves Faith increasingly isolated and paranoid, and before long she begins to wonder if everything that's lost can be found again...

He killed three hundred girls before he came to my village, looking for a wife. When a powerful and dangerous king arrives in the desert to take one of the village girls as his next wife, one girl will stop at nothing to save the life of her sister - even if it means sacrificing herself. At his palace she is sure death awaits. But the king's fascination with her keeps her alive night after night, as the tales she weaves for him create a strange magic between them and her words come to life before her eyes. As her stories become more intricate and beautiful, her magic becomes more powerful, but will it be enough to save her?

Mel Hannigan doesn't have it easy. Mourning the death of her firework of a brother, facing the loss of three friendships that used to mean everything to her and struggling to deal with a condition that even her closest friends don't know about. To protect herself and everyone else, Mel tries to lock away her heart, to live quietly without pain - but also without hope. Until the plight of an old friend, and meeting someone new, shows her that the risk is worth taking, that opening up to life - and who you really are - is what can make everything glorious...And that maybe Mel can discover a tragic kind of wonderful of her very own.

There are two sides to every summer. Rory McShane's signed on to be a summer errand girl for a wealthy family with an enormous beachfront mansion. She hopes she'll be able to sneak in some sunbathing too. Enter Isabel Rule, who's not only up for sunbathing but set on having a breathless summer romance that her family would never approve of. Isabel has decided that this is the summer for taking chances, and she's dragging Rory along for the ride. But when long-hidden secrets start to surface, their friendship will be put to the test.

Sixteeen-year-old Meredith is fed-up with her feuding family and feeling invisible at school - not to mention the witch magic that shoots out of her fingernails when she's stressed. Then sweet, sensitive Jack comes into her life and she falls for him hard. The only problem is that he is periodically possessed by a destructive centuries-old curse. Meredith has lost her heart, but will she also lose her life? Or in true fairytale tradition, can true love's kiss save the day?

The cure has spread from city to city, and the pretty regime that kept humanity in a state of bubbleheadedness has ended. Boundless human creativity, new technologies, and old dangers have been unleashed upon the world. Culture is splintering, the cities becoming radically different from each other as each makes its own way into this strange and unpredictable future . . . One of the features of the new world is that everyone has a "feed," - the ratings of your feed (combined with how much the city interface overhears people talking about you) determines your social status--so everyone knows at all times how famous they are.

Lauren oliver’s before I fall

For popular high school senior Samantha Kingston, February 12—"Cupid Day"—should be one big party, a day of valentines and roses and the privileges that come with being at the top of the social pyramid. And it is…until she dies in a terrible accident that night. However, she still wakes up the next morning. In fact, Sam lives the last day of her life seven times, until she realizes that by making even the slightest changes, she may hold more power than she ever imagined.

It’s been so long since Auden slept at night. Ever since her parents’ divorce—or since the fighting started. Now she has the chance to spend a carefree summer with her dad and his new family in the charming beach town where they live. A job in a clothes boutique introduces Auden to the world of girls: their talk, their friendship, their crushes. Then she meets Eli, an intriguing loner and a fellow insomniac who becomes her guide to the nocturnal world of the town. Together they embark on parallel quests: for Auden, to experience the carefree teenage life she’s been denied; for Eli, to come to terms with the guilt he feels for the death of a friend.

Fresh from a brief stay at a psych hospital, reporter Camille Preaker faces a troubling assignment: she must return to her tiny hometown to cover the murders of two preteen girls. For years, Camille has hardly spoken to her neurotic, hypochondriac mother or to the half-sister she barely knows, a beautiful thirteen-year-old with an eerie grip on the town. Now, installed in her old bedroom in her family's Victorian mansion, Camille finds herself identifying with the young victims—a bit too strongly. Dogged by her own demons, she must unravel the psychological puzzle of her own past if she wants to get the story—and survive this homecoming.

So these are some of the books I've purchased in July! I've already read Before I Fall from the library a while ago, but I recently watched the movie on Netflix, and it inspired me to reread it, especially when I found it for less than £3!

Posted by Exploration of Creation at 04:42