A Theme: Mental Health in YA

This is post number two in my theme series (you can read all about grief in YA here) and it's mainly going to be focused on the exploration and perceptions of mental health in some of the YA fiction that I've read. I'm going to be talking through some of the best examples I've found, and recommending lots of reads, if you're interested. Obviously, be warned that a lot of these books contain potentially triggering topics and themes, so be smart.

Holly bourne’s am I normal yet? 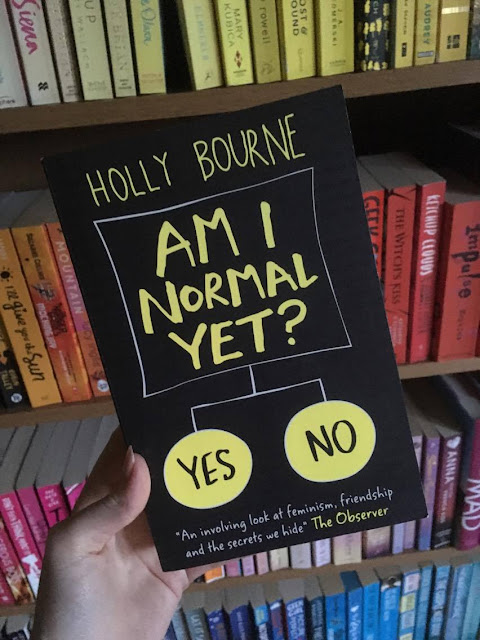 "You may feel broken, but you don't break others."

I first read this book at the very start of 2017 and I found it completely stunning. It's still one of the best books I've read this year. It follows Evie, a teenage girl trying to navigate the teenage qualms of senior school, female friendships and first boyfriends. Far more difficult, though, is the crippling OCD and anxiety that Evie battles with on a daily basis. As someone who has suffered with anxiety for as long as I can remember, I found Holly Bourne's writing of anxiety to be incredibly accurate and seriously moving in places. But what's really great, is that this book is genuinely funny and hopeful, too.
This book really focuses beautifully on the way in which somebody in the clutches of a mental health condition struggles with relationships and intimacy but also with just how isolated mental illness makes a person. Evie struggles to be honest with her friends and her family as her mental health spirals downwards once again, and begins to push people that she loves away. The scene just before she's hospitalised is incredibly difficult to read, so so sad, but powerful. The conversation she has with her mum in the hospital at the very end made me WEEP. You can read my full review of Am I Normal Yet? here. 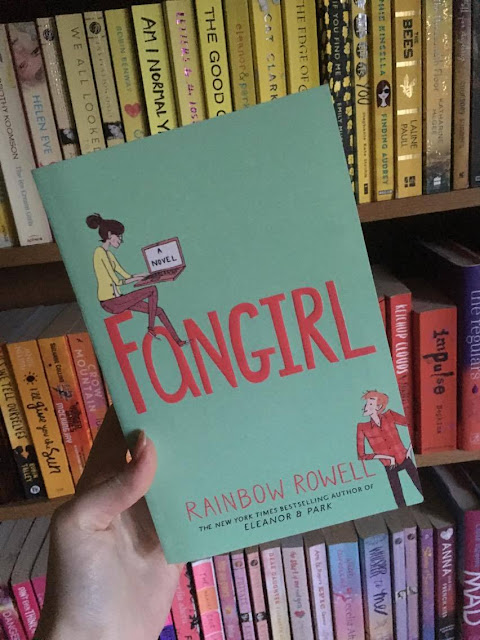 "Just... isn't giving up allowed sometimes? Isn't it okay to say, ‘This really hurts, so I’m going to stop trying’?"

Fangirl was one of my favourite books of 2016 because it was SO relatable. Fangirl follows Cath, a young woman who has just moved to university. Cath struggles with pretty severe social anxiety, and much prefers cuddling up in bed with her laptop to the usual student stuff like drinking and nightclubs (she's got it so right, in my opinion). The quote above is my favourite in the book because I just think it's very honest and real - I think for anybody who has struggled with anxiety, this quote will hit home. It's so logical - why do we always have to be brave?! But whilst Cath goes through this doubt, she is constantly brave! She never quite gives up, which is really inspiring.
I read this for the first time after my first year at university, which was the most difficult year of my entire life for many, many reasons. I found Cath's story hopeful, uplifting and most of all comforting - it felt really nice to know I wasn't alone. For that reason, thank you Rainbow Rowell, for writing this glorious book that made me smile, laugh and cry in equal measure!! You can read my full review here. Another book focusing on anxiety that I really loved is Sophie Kinsella's "Finding Audrey". 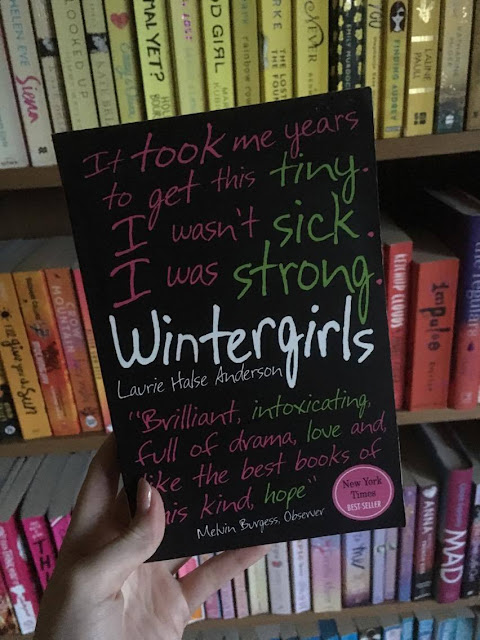 "There is no magic cure, no making it all go away forever. There are only small steps upward; an easier day, an unexpected laugh, a mirror that doesn't matter anymore."

Moving away slightly from anxiety now, I want to discuss the depiction of eating disorders (namely, anorexia) in Laurie Halse Anderson's Wintergirls. The novel follows Lia, a young woman supposedly in recovery, who discovers that her ex-best friend (and fellow sufferer) Cassie has died. It's worth stating from the start that this is not a tumblr-style, romantic story about anorexia - it's very hard-hitting and tough to read.
Lia definitely was not the most likeable protagonist in the world, but that made her story, and the novel as a whole, so much more realistic, in my opinion. I also think the inclusion of family in this novel is really important - it shows the reactions/emotions of Lia's father, mother, stepmother and younger sister, and how different these all are. If you're not keen on reading something really bleak, let me at least tell you that there is a hopeful turn towards the end of the story, which yet again feels real and not glamorous or fairytale-like. You can read my full review here. Another book that grapples with eating disorders that I enjoyed was Claire Henessey's Nothing Tastes As Good.

Jennifer niven’s all the bright places 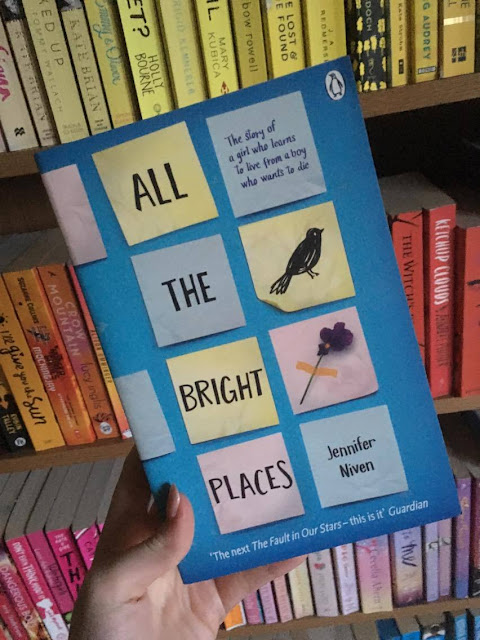 “What a terrible feeling to love someone and not be able to help them.”

Jennifer Niven's All The Bright Places is a really moving exploration of depression (worth noting here that the book also deals with suicide as a topic quite a lot). It follows Finch and Violet, both high school students struggling with depression, who meet on the ledge of their school's bell tower, both considering jumping. Now I know a few people have issues with this book for various reasons, and some say that it uses love as a "cure" for mental health, but I didn't think that was the case at all. Surely the ending proves that?!?
One of the most important parts of this story in my opinion was the depiction of Finch, as a depressed, suicidal character. He is confident, attractive, compelling and funny - he is not completely isolated, unable to maintain friendships or romantic relationships. He does not even outwardly appear as down, never mind miserable, never mind clinically depressed. I think it's really important to see past the cliches of depression as well as to recognise that depression doesn't necessarily look one way; you cannot assume you will know, which rightfully forces us all to be more perceptive and caring. You can read my full review of All The Bright Places here. 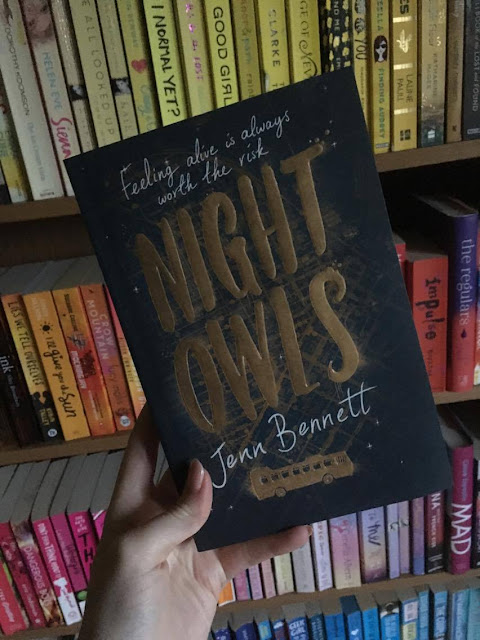 "I don't want to hide your scars. I want to show you as a whole person. Just like anyone else."

Finally I want to talk about Jenn Bennett's Night Owls, which I never realised had mental health issues within it upon picking it up. The more general story is one of THE best YA contemporary romances I've ever read, following Beatrix as she falls in love with the elusive street artist/politician's son Jack. The mental health representation comes in through Jack's sister Jillian, who has been hospitalised for her schizophrenia. I think this is the only book I've ever read to explore this particular mental health condition - I'd be really interested to read some more, so leave any recommendations in the comments section down below!!
Jillian's story encompasses discussion of the perception of mental health in wider society, perhaps particularly the conditions considered more "dangerous" - Jack's family are wealthy, influential and very famous, and their initial embarrassment/shame in regards to Jillian, their choice to hide her away and pretend that she doesn't exist, is really sad and infuriating to read. Jack's selfless, loving approach to her, his lasting belief that she is still just his sister, no matter what is happening inside of her head, is THE most engaging and attractive part of him as a character and gives not only him serious depth, but the novel as a whole. You can read my full review here.

Posted by Exploration of Creation at 06:59