Today's post is a January Unhaul!! During January, I really felt like having a spring clean of my shelves and donating some books that I really didn't enjoy. I should mention that after donating this pile of books, I also donated Ali Land's Good Me Bad Me (I read the first 40 pages or so and it made me feel so uncomfortable and horrible reading it that I didn't want to even keep it - someone else with a stronger resistance to thrillers/darker reads might like it better). 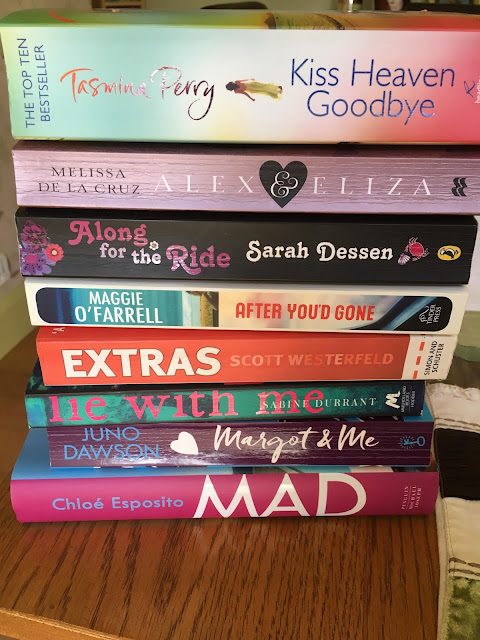 This book was really badly written and structured from the first page to the last, unfortunately. It is set up to be this murder mystery on a tropical island with Gossip Girl-style privileged teenagers - it just sounded like glamorous, frivolous fun!! But we spend about 90 pages on the island listening to these spoilt characters complain and then find a dead body and then the last 40 pages finding out what happened there (which, by the way, wasn't even a good twist). So then there's about FIVE HUNDRED pages of hearing these spoilt brats complain, drink, take drugs and have sex. There wasn't a single redeemable feature about this book, and I gave it one star.

I also gave this book just one star and it kind of showed me once and for all that Melissa De La Cruz's writing just isn't for me - I don't think she writes bad books by any means, I just never really seem to enjoy her stories or connect with any of her characters. This book was just simply bland. All of the characters were just so plain, vanilla, boring...besides that, there were some 21st century phrases used that I'm 99% sure weren't used in the 1700s!!!

By now this book is nearly 10 years old, and you could definitely tell it was dated whilst reading, in my opinion. Auden's parents were really annoying - her mother was the worst feminist I've ever read as well as being super superior and her father was just SO selfish. Auden herself wasn't a great protagonist, I found her quite stroppy and shallow. Even Eli as a love interest wasn't exciting, though he seemed a nice guy. Overall this book just missed all the marks for me.

This is a book I actually DNF-ed. Based on the blurb, it sounded so great. A woman travels from London to Scotland, where something happens that makes her get straight back on a train to London and, once there, step out in front of traffic, ending up in a coma. But, when reading, she literally does ALL of this within the first 20 pages or something (I think, I can't remember the exact number, but it was ridiculous). And the "thing" that happens seemed to be something she saw in her own reflection?!?! I was just SO confused.

I read and enjoyed Scott Westerfeld's Uglies series, but I really couldn't get into this book, so I DNF-ed it at around 150 pages, I think. I just knew I didn't care for where the plot was going, running around at night with some secret society, doing tricks etc. There didn't seem to be any of the character development and cool world-building from the original trilogy. Also, for me, dystopian is only something I'll commit to if I'm really enjoying it, because contemporary is definitely my favourite genre.

Sabine durran’ts lie with me

I tried to get into this thriller, I promise, but I honestly just didn't want to spend 300 odd pages listening to this sexist, irritating, selfish, hateful middle-aged man manipulate people, complain and generally be a weasel. I understand that he is totally meant to be that way, but I just didn't see the effect of it. Also, the build up of "mystery" in this first third or so that I read was rubbish, because I felt no pull to finish for the big reveal or suspense-building at all. Don't feel like I've missed out.

This book was surprisingly disappointing; the only other Juno Dawson book I've read (All of the Above) I gave 5 stars, so to read this and dislike it sucked. Felicity as a protagonist was my main issue; she just wasn't a very likeable person and I felt like she was quite overwritten in attempts to be super funny and sassy. The structure was also an issue; I didn't see why Margot's diaries were relevant other than as a plot device. Besides that not enough happens until the very end of th novel (which was what saved this from being a one star read and made it two).

This was one of the strangest books I've ever read; I thought it would be quite glamorous and exciting, but it ended up being this weird story full of dodgy guys, guns, murder and really explicit sex scenes. I just don't even get the point of this book - Alvie is described as a "train wreck" and she's never given any further character development to be anything but that. Bizarre.

That's the books I donated to charity last month! Let me know if you got rid of anything recently & whether you've read any of the ones I didn't like here.

Posted by Exploration of Creation at 07:04