I've been wanting to read Emma Mills's books for quite a while now but because I've never actually seen physical copies in a UK store before I haven't ever really had the opportunity to pick one up. Regardless, I've heard almost overwhelmingly positive things. Then, just a few weeks ago, my friend Maddie told me how much she had loved This Adventure Ends, so much so that it was her favourite book of 2018. That was kind of the breaking point for me; I gave in and ordered it from Amazon. And oh my goodness, I am SO glad I did... 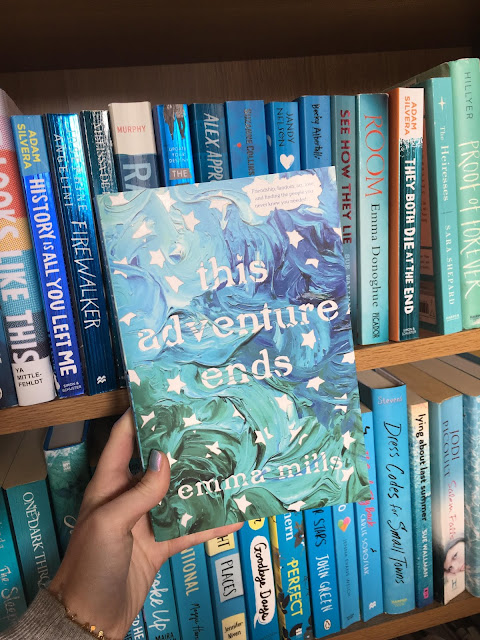 Sloane isn't expecting to fall in with a group of friends when she moves from New York to Florida—especially not a group of friends so intense, so in love, so all-consuming. Yet that's exactly what happens.
Sloane becomes closest to Vera, a social-media star who lights up any room, and Gabe, Vera's twin brother and the most serious person Sloane's ever met. When a beloved painting by the twins' late mother goes missing, Sloane takes on the responsibility of tracking it down, a journey that takes her across state lines—and ever deeper into the twins' lives.

"We should all find something to be weirdly passionate about, don't you think?"

This is a book about a lot of different things. Grief. Sibling relationships. Parent-child relationships. Friendship. Social media. Fanfic & fandom. Self-development. First love. Writing. Music. Art. The future & the past. Forgiveness. Somehow, though, the narrative remains perfectly paced, uncomplicated and compelling. Never once did it feel overstuffed or messy or confusing.

The main romance in here is probably one of the best written slow-burners I have come across; it was almost painful, waiting for Sloane and Gabe to get together, and I enjoyed every second of it. There was great tension and chemistry, and whilst they were these polar opposite characters, they seemed to fit perfectly. Despite the perfection of this relationship, love as a theme stretched far further than just the two of them. Vera's beautifully written lesbian relationship, whilst rarely in the spotlight, was not only great representation but also a great example of an already-established relationship, instead of a brand new one. And there are several other romantic relationships also, including parental ones, all of which are written with equal care and honesty, despite not being quite so much at the story's centre. The way that love is written about by Emma Mills stunned me; never once was it pretentious or cliched,  but it was always gorgeous.

"The city pulses on around us, and I'm not sure which one of us is anchoring the others, but I've never felt less adrift."

The lost painting storyline was very clever in the way that it drew Sloane into the group and pushed the plot forward, but I liked how it began to feel almost incidental (never to her, because she cared so much) as the other characters fell in love with her regardless. When the storyline finally came to fruition, and the painting was found? I will admit I may have cried a little.

"The thing about fic is that it comes from love. Characters you love so much, that you feel so deeply for, you'll watch them fall in love a thousand different ways, over and over."

There are so many things I want to talk about when it comes to this story, but where to begin and how to stop myself from going on forever?!  But I do feel like I have to mention Sloane's father, who is ridiculous and funny. He made me laugh out loud on numerous occasions. I loved how writing as a topic was brought into the story through his character. I loved hearing about his writing process and his writer's block and his thoughts on the difference between book/movie/TV love & the real thing (and, interestingly, the similarities). And then...that betrayal! I was honestly so shocked by that turn of events - so clever!

"Maybe there's a kind of friend love that opens you up... Maybe you didn't have a place for it within you before, but once it finds you out, crawls inside, and makes space for itself, you can't live without it ever again."

My favourite thing about this book, though, without a doubt, is Sloane. She's our protagonist and our narrative voice. She is also unflinchingly honest, incapable of taking 98% of things seriously, painfully sarcastic, absolutely hilarious and stupidly, stupidly charming. She is one of the best characters I have read in a really long time. I could read 100 more books about her (and the rest of the characters, in fairness). I also loved seeing how she changed more and more as time went on, how she remained herself at the core, but opened up and dropped her defences and softened.
If this is how Emma Mills tells stories, with characters like Sloane, I absolutely need to read every book she has ever written in the shortest amount of time possible.

Honestly, though, I could really go on forever, paragraph after paragraph, and I can't write like Emma Mills, so you won't want to read that. All I can say is that This Adventure Ends is definitely the best book I've read so far in 2019. I would be VERY surprised if this book didn't end up on my Top 5 of the year, in fact. I'm literally going to finish writing this post and then hop on over to the nearest book-selling website and try to buy the rest of her books.

Katie
Posted by Exploration of Creation at 01:53