A Review: Jennifer Niven's All The Bright Places

This book is one of those I had heard a million and one things about before I decided to read it - Jennifer Niven's All The Bright Places. I’d heard that the premise was, essentially, a teenage boy and a teenage girl meet on the ledge of their school’s bell tower, both thinking about jumping. I could assume from the basic idea that they would fall in love, too. But when I began to read, I was so happily surprised. Don’t get me wrong, all of the above is true, but it wasn’t in the least bit predictable. WARNING: some spoilers are ahead and they are sign-posted, but just to be sure!! 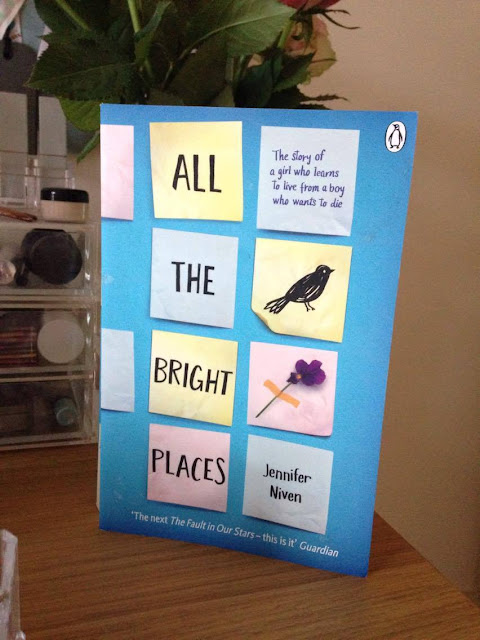 “Do you know my life is forever changed now?”

Theodore Finch wants to take his own life. Violet Markey is devastated by her sister's death. They meet on the ledge of the school bell tower, and so their story begins. But, as Violet's world grows, Finch's begins to shrink. How far will Violet go to save the boy she has come to love?

A quick plot summary is this: yes, Finch and Violet DO meet on the ledge of the bell tower at school, both thinking about committing suicide, or at least what it might feel like to do it. Finch is depressed and has been abused throughout his life by his father. Violet is trying to get over the death of her sister, Eleanor, who died in a car accident that Violet blames herself for. Over time, they get closer and closer through a Geography project and end up falling in love.

The narrative is split between Finch and Violet’s perspective – usually in this structure I find myself gravitating towards one narrator far more and wanting to skim-read the other’s parts, but in this case, whilst I preferred Finch’s character, I think I almost loved their voices equally, or near enough.

“You make me love you and that could be the greatest thing my heart was ever fit to do.”

Firstly, I have to talk about Finch. He is one of my favourite characters ever. I feel as though using him to represent an element of mental health was exceedingly clever and complimentary – despite everything, he is such a strong character. Besides that, he’s pretty damn confident and compelling and attractive (in my mind, anyway). I really loved the exploration of a character just like that having mental health problems – the universality effect was strong. Finch is so funny. And more than that, I love the way he loves Violet. He’s absolutely relentless but so charming, I have no idea how she manages to stay away for as long as she does (let’s be honest, it’s not THAT long, but still). I absolutely love the way in which Finch encourages Violet to live her life and love her life – despite everything he is going through. Violet laments that towards the end of the novel, asking how he could possibly tell her to be happy when he was thinking what he was thinking, but I think it just shows how wonderful he is. He couldn’t do it for himself, but he could make it possible for her.

“No more winter at all. Finch, you brought me spring.”

Violet herself was also a great character. She’s no Finch, but all the same. I sort of thought I was going to hate the “popular girl gone bad” dynamic, but again, I made early assumptions. Her ex-boyfriend, is not the asshole jock who bullies and belittles – instead, Roamer takes on that role, and I really didn’t like his character at all, and almost wished he wasn’t in the story, but he serves an obvious role and takes up very little space. Amanda was another character I wanted to hate (and did, strongly, at moments) but I adored the depth Jennifer gave her, making her so much more than just the vapid cheerleader. Her own mental health issues absolutely blind-sighted me, but I was surprised in a good way. I never would’ve expected that character development, and I was glad of it.

“You are all the colours in one, at full brightness.”


I had seen one blogger talk about how adults in the book were represented as evil and not understanding of mental health conditions. I would have to disagree. I definitely didn’t think the parents were the stand-out characters, that’s for sure, but I don’t think they’re supposed to be. Besides that, Violet’s parents, although perhaps not totally clued-in (because she, a lot of the time, doesn’t allow them to be) were kind, honest characters, they were just grieving and as a consequence of that grief, as a consequence of losing a child, incredibly protective over their remaining daughter. Finch’s parents are perhaps slightly more problematic – his father shows some remorse towards the end (when it’s far too late) but is generally a pretty horrible man and his mother is just lost. The way in which they seem to simply allow his descent, or at least not notice it at all, made me sadder and madder as I read. His older sister, Kate, was a character I really appreciated – her protectiveness was one of the few examples possible to find of somebody, other than Violet and her parents, caring for Finch. Even his “best friends” just accept his issues, and never address them.

“What a terrible feeling to love someone and not be able to help them.”

I have to talk about the ending. LOOK AWAY RIGHT THIS SECOND IF YOU DON’T WANT SPOILERS SPOILERS SPOILERS. I considered attempting a spoiler-free review, but talking about this book without talking about the ending just seemed impossible. I cried, I’ll admit. In fact, it was ugly crying, not a single graceful tear. I don’t want to compare and contrast and draw parallels between books that are separate entities, but it was a similar feeling to reading the moment when Hazel Grace’s parents come into her bedroom, in the middle of the night, and she starts crying because she knows what has happened without them needing to say it out loud. That’s the moment I was reminded of when Violet is working through the goodbyes Finch has told everybody he cares about. I just had this feeling of dread slowly building. I kept thinking no, he won’t be dead, she won’t have killed him. Alas, quite the opposite I’m afraid. Did everybody else have this reaction or did you see it coming?! I was so sad to hear Violet questioning why everybody she loves seems to leave her, why she wasn’t enough for Finch to want to live. Now I’ve had some time to reflect, I can’t say I’m glad his character died BUT it does reflect the realistic nature of life, mental health, depression, suicide, all of those things. The tone of his death seemed to be “this is not a fairy-tale”. There was no Prince Charming and princess living happily ever after and that’s kind of important. Not everybody can beat their demons. Finch couldn’t quite.

“You saved my life. Why couldn’t I save yours?”

All in all, I’d say absolutely believe the hype. Believe this hype. By now I’m sure most YA-enthusiasts have read this book, but if you haven’t, PLEASE DO. Like I said before, I did get some John Green-feels, which I was entirely happy about. Some of the most gorgeous, emotional quotes were, of course, taken from Virginia Woolf’s suicide letter that Violet and Finch discuss a lot (“if anybody could have saved me it would’ve been you”) and the painful mirroring is clear come the end. It’s a beautiful, emotional book. It’s very real, very funny. My heart was broken for Violet at the end because WOW, how do you ever find somebody like Finch a second time around? I was glad for her, too, and oddly proud, because she made it and she was stronger for having fought it. Atta girl. (Jeez, I know they’re not real, but sometimes it really does feel like it!!!)

Posted by Exploration of Creation at 05:26