A Review: Louise O'Neill's Only Ever Yours 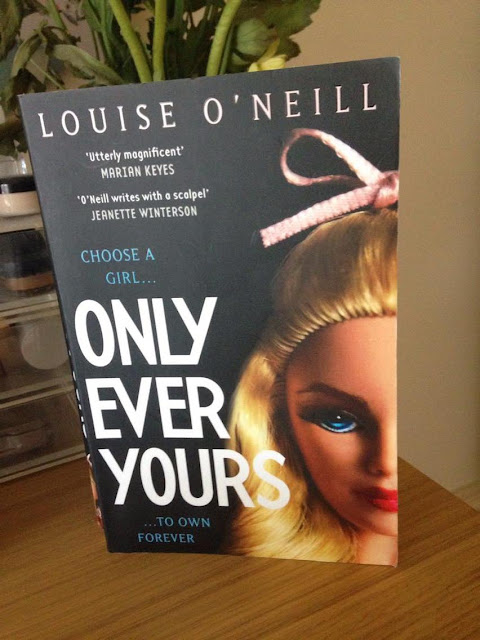 freida and isabel have been best friends their whole lives. Now, aged sixteen and in their final year at the School, they expect to be selected as companions - wives to wealthy and powerful men. The alternative, life as a concubine - is too horrible to contemplate.

But as the intensity of the final year takes hold, the pressure to remain perfect becomes almost unbearable. isabel stars to self-destruct, putting her beauty - her only asset - in peril.

And then, the boys arrive, eager to choose a bride.

frieda must fight for her future - even if it means betraying the only friend, the only love, she has ever known...

"Choose a girl to own forever."

This was actually the first Louise O’Neill novel I read (and it made me desperate to read Asking For It, too) and I adored every page of it. It is essentially a mixture of dystopia and feminism – if that doesn’t entice you, I don’t know what will. Equally, if that puts you off, run away now. Firstly, on a purely aesthetic note, I thought the lack of capitals for names throughout was a wonderful addition to the book, it just really worked on the page. However, surely that must’ve been so annoying or at least odd to type out?! Just doing it in the blurb above drove me mad. Louise has some serious perseverance. When the boys are introduced, with their capitalised names, I understood why she had included the detail and thought it was such a bloody clever element that I wish I’d come up with!

A second aesthetic note to mention is the front cover – totally wonderful in my opinion. It’s actually sort of what drew me to it in the first place. I feel as though seeing Barbie on the front instantly screamed SOMETHING FEMINISTY and I couldn’t put it back down. I also really adore the dystopian genre, for the most part, and so the thought of this book was ideal for me.

"In the beginning, Man created the new women, the eves."

I utterly love the imagination Louise O’Neill has used to create this world. Whenever I read dystopian I always marvel over how intricate and complex and detailed and vibrant the worlds they conjure up are. Essentially, this story is set in a world where women are created specifically for men and are expected to be as physically beautiful as is possible. They are brought up in a special School which teaches them the aforementioned qualities in great detail, and when they reach sixteen, they are chosen by the privileged young men of their society. For some of the girls, this isn’t even an option and instead they become concubines – essentially prostitutes – which the majority of girls consider disgraceful. There is a third and final option – to become a chastity – to live and stay in the School forever, passing wisdom on to the new girls. This is another awful idea for the girls, who see their “teachers” as boring, plain, obedient. Really, getting picked by a man is the only feasible option for the majority of them.

"We have never had a class on how to say no to men whilst simultaneously never saying no to them."

Something that I love about freida (seriously, the temptation to go back and replace that with a capital F is shocking) as a protagonist is how honest she is. I think that’s partly due to the society she has been raised in (the majority of the girls are shockingly shallow, selfish and conceited) but it is also due to Louise’s incredible characterisation and style (Emma in Asking For It was very similar). However, freida is still likeable, still loveable, I was still rooting for her. Her experience in the School made me cringe – only wanting better for these girls (yes, I know it’s not real). Admittedly, I wasn’t as keen on isabel’s character, which might be due to the fact that we never get to know her as well, considering she isn’t main character and she’s incredibly secretive. When her destiny was revealed, I felt greater sympathy for her than any other girl, which I assume was the intention.

"I want to hide, fold into the shadows and become invisible so no one can look at me any more."

I think the exploration of female friendships in this book is also something incredibly important to talk about. I LOVE a book about girl power, with strong female characters who empower each other and never compete, however, I also loved these characters for entirely different reasons. They are strong girls, but they are also manipulative, competitive and totally out for themselves. Even the friendship between freida and isabel – once supposedly the best of friends – disintegrates and never fully recovers. Let’s be honest, though, if freida and isabel had remained BFFs throughout, especially considering their circumstances, it would’ve just been entirely unrealistic. Besides, the overall tone of the book is enough girl power to last a lifetime.

Quick shout-out to Darwin here. A pretty lovely character actually. This is something else wonderful about the way Louise writes about women’s issues; she never allows men to be completely demonised. There is always some sort of saving grace, and in this book, despite expectations of him as the worst of all, Darwin is a pleasant surprise. I wish freida had held on long enough, because he just felt different.

"All eves must play the role that has been assigned to them."

Obviously there are some clear similarities between the two books that I have reviewed of Louise O’Neill’s, but I actually am in awe at how different they are, too. Re-reading this book to review, I forgot just how futuristic and awesome the details are. Here’s the inescapable and understandable (but annoying) thing about the majority of dystopian stories; the main character is always different, always smarter somehow, always fighting the system. I love that Louise hasn’t written into that waiting stereotype and makes freida just as frustrating and vain as any other girl – although, of course, we know her better.

"I am ready to feel nothing, forever."

Time to talk about freida’s fate, so if you’re wanting to read this book, look away now because there’s about to be some SPOILERS. This was the only part of the story that I was kind of undecided about. She doesn’t get the happy ever after, which is fine, because that would’ve been boring and predictable, right? She doesn’t end up as a concubine, which is understandable because that would’ve just felt awkward, considering her characteristics and personality. Instead, she is given the future of a chastity. For me, this just didn’t sit right, for whatever reason. I wasn’t sure what I wanted for her, but it wasn’t really that. Then comes the last page of the novel – that I won’t put into words – but it gave me goosebumps in a creeped out way. And poor isabel’s final fate is just as tragic.

Katie
Posted by Exploration of Creation at 08:00