This was one of the most heart-warming books I’ve come across: Rainbow Rowell’s Fangirl. I have since read Eleanor and Park, which I also loved, but this was the first of Rainbow’s novels I came across, and remains my favourite. What I think I loved most was the flawed nature of the characters. I love the good-looking cast of books (like Gossip Girl, The Thousandth Floor, Tiny Pretty Things etc.) as much as the next person, but I love the realistic nature of all Rainbow Rowell characters I’ve come across so far. Also, it's (for the most part) a lot more light-hearted than the other books I've reviewed so far - I personally like a mixture of both happy and sad books, and this within one, is both. 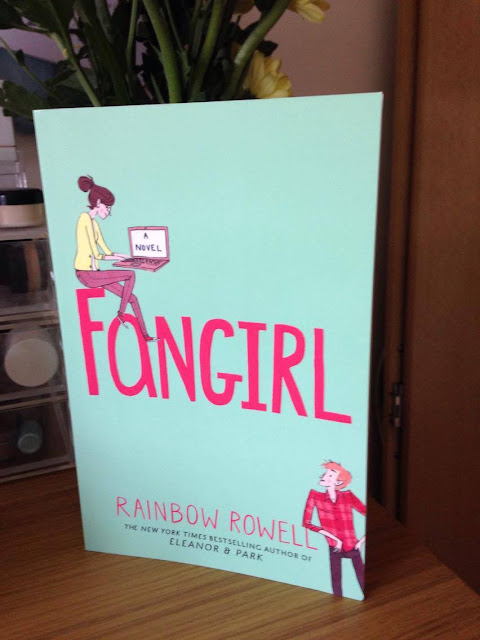 "Because I'm the kind of girl who fantasises about being trapped in a library overnight."

Cath and Wren are identical twins and until recently they did absolutely everything together. Now they're off to university and Wren's decided she doesn't want to be one half of a pair any more - she wants to dance, meet boys, go to parties and let loose. It's not so easy for Cath. She would rather bury herself int he fan fiction she writes where there's romance far more intense than anything she's experienced in real life.

Now Cath has to decide whether she's ready to open her heart to new people and new experiences, and she's realising that there's more to learn about love than she ever thought possible.

Cath as a female protagonist is just wonderful. She’s hilarious and humble – I love that she’s kind of a recluse, who likes blogging on her laptop in bed (SOUND FAMILIAR?!), she takes Creative Writing classes at University and spends unhealthy amounts of time considering her OTPs in her favourite book – seriously, though, HOW accurate?! Please tell me it’s not just me?!

"But you're so helpless sometimes. It's like watching a kitten with its head trapped in a Kleenex box."

I also love her relationship with Reagan, whose also a strong, funny female character whose got a great, brave attitude and is just entirely badass, let’s be honest. For me, she probably had some of the best laugh-out-loud moments in the book – I rarely actually laugh whilst reading, although I often smile, but this book was certainly one where the humour jumped off the page, particularly with this character.

Cath’s twin sister, Wren, is slightly more towards the stereotypes of beautiful, bold girls who make people stop and stare and has a lot of boyfriends. But Rainbow never allows her to be that stock character; Wren is a really interesting one. Her relationship with her mother was fascinating to me; she seems to be more forgiving than Cath, in that instance. I also love the wonderful moments in the latter parts of the novel where Cath and Wren begin to get closer again and we see how much Wren adores the fan-fiction her sister writes (and has often been a talented contributor herself). They have so many similarities and differences, expertly interwoven; on some levels I forgot they were even twins, and then at other moments, their sisterly love was so strong and gorgeous it just made me think of my big sister.

"That's the ultimate kind of broken. The kind of damage you never recover from."

Before I go any further, I want to talk about the moments of “weakness” that Cath’s character goes through and how important and demonstrative I think they truly are. Cath is certainly socially anxious, very homesick and pretty isolated (although a lot of the time this is self-inflicted, it makes it no less upsetting or sympathetic, in my view), but she is also strong, even if she doesn’t often realise it. She nearly gives up on so many things so many times, but never quite does. She has a great support system around her, but ultimately the choices are hers; every time she stuck at something she found difficult, every time she chose to stay instead of walk away when she was in pain, I found myself growing fonder and fonder, prouder and prouder. She’s a wonderful teenage, female protagonist. Far from perfect, but so, so lovely.

"Just... isn't giving up allowed sometimes? Isn't it okay to say, ‘This really hurts, so I’m going to stop trying’?"

I also found the development of the girls’ parents really interesting; their dad made my heart hurt and smile simultaneously at most points. I could completely relate to the way in which Cath desperately wanted to take care of him and watch over him. In contrast, her vehement anger towards her mother surprised me. Not because she didn’t deserve to feel that way, because she completely did, but I think I would’ve expected that to be Wren’s reaction and for Wren’s actual reaction to be Cath’s, if that makes sense. In the end, I’m glad it was the opposite way around, because it just showed more depth to the girls, a forgiving, gentler side to Wren and the fierce protectiveness and loyalty of Cath.

"You know that I’m falling in love with you, right?"

Time to talk about Levi. He is absolutely one of the best male characters I have ever been introduced to. I may have, in the past, been more partial to the “bad” guy characters as opposed to the lovely ones, but Levi has turned those thoughts around. He is so sweet, in fact his sweetness is one of the reasons Cath resents him at first, but he is just addictive. His entire personality is sunshine. I feel as though he and Cath are just so lovely together – also, it’s such a wonderful thing to have the relationship take a real journey before becoming even vaguely romantic! I don’t mind the odd bit of “love at first sight” stuff, but this feels so much more realistic and made me root for them so much more. I can genuinely say my stomach dropped when Cath walked into Levi’s house party and saw him kissing another girl – even that couldn’t make me hate him, though. Levi is incredibly kind, selfless and patient. I love the moments where Cath reads to him – completely endearing and sweet.

"You give away nice like it doesn't cost you anything."

I love the way Levi and Cath – and the rest of the characters in Fangirl – speak. I really am not opposed to a little bit of pretentious talk in YA romance for the most part, but Fangirl is so refreshingly the opposite of that!

For a while, I kind of thought Nick could work with Cath as a filler before she saw the light and realised how bloody perfect Levi was for her. Then he did a total 180 by telling her he was going to submit the short story they’d been writing together for fun, as a University assignment on his own (and thus get all the credit). His justification is that it was all his general idea whilst Cath just edited it – but of course in editing it she makes it so much better! I was honestly really surprised when she wouldn’t let him have it entered into a competition because knowing her to be the wonderful person we do, I thought she’d cave immediately. I was so proud of her for telling him to, essentially, jog on! I had a second of sickening sympathy for him when he realised he wasn’t going to get any success or acclaim for the brilliant story – which is further evidence of how wonderfully Rainbow has written even the kind of crappy characters who we aren’t madly in love with – but in the end, Cath did the right thing for herself (and morally), and that’s all that matters.

"Cath was pretty sure that Levi actually was the brightest thing in the room, in any room. Bright and warm and crackling – he was a human campfire."

I could not recommend this book more. Don’t be put off by the idea of “fanfiction” being involved. It’s woven by well throughout the narrative and is actually key to the real-life plot in places, too. I really enjoyed reading the pieces of Cath’s fanfiction (and from the “original” novel she’s a fan of) and found myself getting emotionally invested in that world, too! Which seems silly considering that world doesn’t exist in the first place, then Cath’s fanfiction of that world doesn’t exist and neither does Cath’s world! Does that make any sense…?!

I noticed on Goodreads that Rainbow Rowell has brought out Carry On as a book of its own?! Desperate to read that very, very soon!!!

Finally, I love how important reading and writing is in Fangirl. As a reader, writer, English Lit student, Creative Writing student, blogger … well, this book was pretty much perfect for me. And even if you aren’t those things, I still defy you to find it anything other than pretty damn funny and wonderful.

"They were just stories, but stories weren't just anything."

Posted by Exploration of Creation at 04:50