On a recent library trip, I picked up a very random collection of books that I'm pretty excited about!! Now, I've never been tempted before to read an SJM book, and Catwoman isn't exactly a character I have a great deal of knowledge about so...we'll see if I actually get around to reading that one. Also, Almost Love by Louise O'Neill may end up being a bit dark and overwhelming considering my current state of mind, so I'll see how I get on with that one, too.
You can keep up to date on the books I do and don't get to, and what I thought of them, by adding me on goodreads here or by waiting for a monthly wrap-up!! Anyway, on with the books... 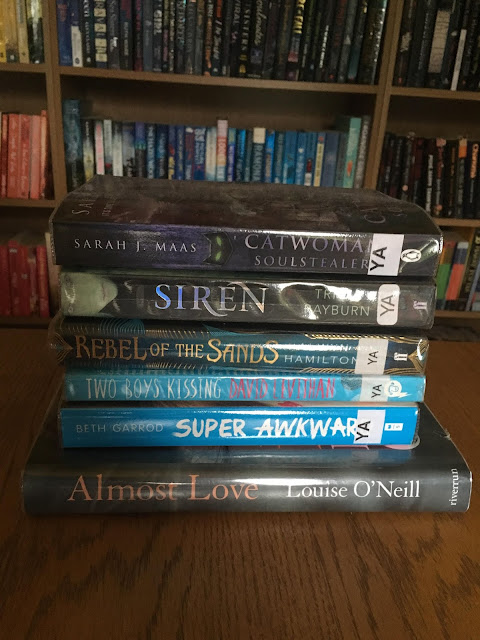 When Sarah falls for Matthew, she falls hard.So it doesn't matter that he's twenty years older. That he sees her only in secret. That, slowly but surely, she's sacrificing everything else in her life to be with him.Sarah's friends are worried. Her father can't understand how she could allow herself to be used like this. And she's on the verge of losing her job.But Sarah can't help it. She is addicted to being desired by Matthew.And love is supposed to hurt.Isn't it?

I, Bella Fisher, am absolutely WINNING at FAILING at life. 1. I once got my tongue stuck to a box of Calippos in a supermarket. 2. I accidentally called my geography teacher Mum. Twice. He wasn't impressed. 3. I'm a geek. And not in a geek-chic kind of way, but in a secretly-caring-about-failing-maths-and-science way. 4. I always fail maths and science. So it figures that when I meet the FITTEST BOY IN THE WORLD, Zac, I'm doing solo star jumps. While dressed as a cereal box. Now I've got to somehow persuade Zac to come to prom with me while avoiding my evil ex and dealing with a secret so mega-awks I want to Ctrl-Z my brain... What could go wrong? Oh yeah, that's right. Absolutely everything.

Harry and Craig, two 17-year-olds who are about to take part in a 32-hour marathon of kissing to set a new Guinness World Record—all of which is narrated by a Greek Chorus of the generation of gay men lost to AIDS. While the two increasingly dehydrated and sleep-deprived boys are locking lips, they become a focal point in the lives of other teen boys dealing with languishing long-term relationships, coming out, navigating gender identity, and falling deeper into the digital rabbit hole of gay hookup sites—all while the kissing former couple tries to figure out their own feelings for each other.

Alwyn Hamilton’s Rebel of the Sands

Mortals rule the desert nation of Miraji, but mythical beasts still roam the wild and remote areas, and rumor has it that somewhere, djinn still perform their magic.  For humans, it’s an unforgiving place, especially if you’re poor, orphaned, or female.Amani Al’Hiza is all three.  She’s a gifted gunslinger with perfect aim, but she can’t shoot her way out of Dustwalk, the back-country town where she’s destined to wind up wed or dead.Then she meets Jin, a rakish foreigner, in a shooting contest, and sees him as the perfect escape route. But though she’s spent years dreaming of leaving Dustwalk, she never imagined she’d gallop away on mythical horse—or that it would take a foreign fugitive to show her the heart of the desert she thought she knew.

Seventeen-year-old Vanessa Sands is afraid of the dark. And heights. And the ocean. And pretty much everything else. Fortunately, Vanessa's fearless older sister, Justine, has always been there to comfort her. That is until Justine jumps off a cliff near their family's holiday home in Winter Harbour, her lifeless body washing ashore the next day.
Vanessa returns to Winter Harbour alone, looking for answers from Caleb Carmichael, Justine's summer love who was with her when she jumped. But when Vanessa learns that Caleb has been missing since Justine's death, she joins forces with Caleb's older brother, Simon, to try to find him.
Soon, it's not just Vanessa who is afraid. Panic sweeps through Winter Harbour as more bodies wash ashore, all male, each victim found grinning from ear to ear. And as the death toll mounts, Vanessa realises that to save Caleb and solve the mystery of her sister's death, she has to confront a secret she's kept for years - one that could end her summer romance with Simon and even life as she knows it.

Two years after escaping Gotham City's slums, Selina Kyle returns as the mysterious and wealthy Holly Vanderhees. She quickly discovers that with Batman off on a vital mission, Batwing is left to hold back the tide of notorious criminals. Gotham City is ripe for the taking.Meanwhile, Luke Fox wants to prove he has what it takes to help people in his role as Batwing. He targets a new thief on the prowl who seems cleverer than most. She has teamed up with Poison Ivy and Harley Quinn, and together they are wreaking havoc. This Catwoman may be Batwing's undoing.

So those are the library books I got this month! Let me know if you've read any of them and what you thought, in the comments section down below!!

Posted by Exploration of Creation at 02:33