So I've picked out four Halloween-appropriate reads to make up my October 2018 TBR - there are probably better books on my shelf to read around Halloween, but honestly I'm not much in the mood for anything majorly dark at the moment, so I'm bringing in the witches, the evil fairies and some YA thrills. What spooky reads are you going for in October? Let me know by leaving a comment down below!! 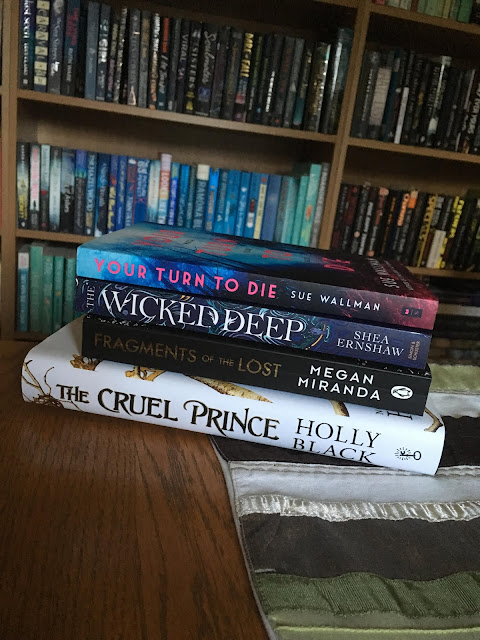 Sue Wallman’s Your Turn To Die

Every winter, three families gather in an old house to celebrate the New Year. This year, 15-year-old Leah and the other kids discover that the house has a dark past. As they dig into the history, terrible things start happening, and if Leah isn't careful, this New Year might be her last.

Welcome to the cursed town of Sparrow where, two centuries ago, three sisters were sentenced to death for witchery. Stones were tied to their ankles and they were drowned in the deep waters surrounding the town. Now, for a brief time each summer, the sisters return, stealing the bodies of three weak-hearted girls so that they may seek their revenge, luring boys into the harbor and pulling them under.Like many locals, seventeen-year-old Penny Talbot has accepted the fate of the town. But this year, on the eve of the sisters’ return, a boy named Bo Carter arrives; unaware of the danger he has just stumbled into.Only Penny sees what others cannot. And she will be forced to choose: save Bo, or save herself.

Megan Miranda’s Fragments of the Lost

Jessa Whitworth needs to uncover the truth about her ex-boyfriend's death. She didn't belong in Caleb's room. But she couldn't deny she was everywhere. Even in the dragonfly necklace in his jeans pocket... the one she gave him to look after on that day. His family blame her for his death, but still make her box up his room. As she packs up his life, piece by piece, memories are triggered that make Jessa realise Caleb may not have been how she remembers. Did she ever really know him at all? And what really happened the night he died?

One terrible morning, Jude and her sisters see their parents murdered in front of them. The terrifying assassin abducts all three girls to the world of Faerie, where Jude is installed in the royal court but mocked and tormented by the Faerie royalty for being mortal. As Jude grows older, she realises that she will need to take part in the dangerous deceptions of the fey to ever truly belong. But the stairway to power is fraught with shadows and betrayal. And looming over all is the infuriating, arrogant and charismatic Prince Cardan...

So that pretty much sums up my somewhat-spooky October 2018 TBR! I'm really, really looking forward to them all, actually - I can't wait to get started!!

Posted by Exploration of Creation at 01:53