A Review: Emma Mills's First & Then

Today's post is going to be a 5-star review of Emma Mills's debut novel, First & Then. I realise my book reviews are very Emma Mills-heavy right now, but that's because I bought and read all four of her books within a couple of weeks and all four were 5-star, review worthy! 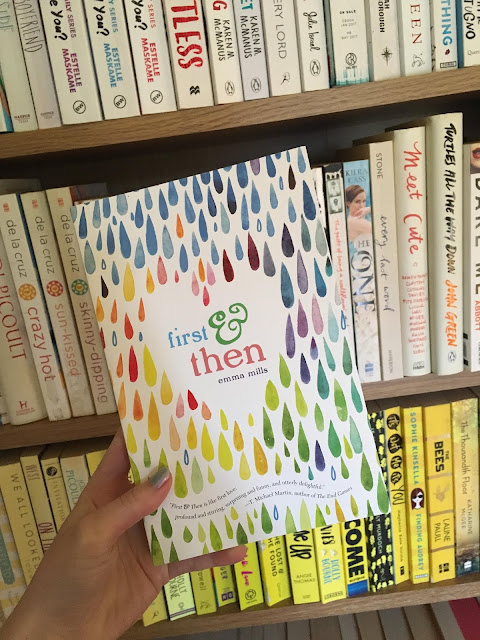 Devon Tennyson wouldn't change a thing. She's happy watching Friday night games from the bleachers, silently crushing on best friend Cas, and blissfully ignoring the future after high school. But the universe has other plans. It delivers Devon's cousin Foster, an unrepentant social outlier with a surprising talent for football, and the obnoxiously superior and maddeningly attractive star running back, Ezra, right where she doesn't want them: first into her P.E. class and then into every other aspect of her life.

My initial impression of this book was that I really wasn't going to like it as much as the others I had read (at that point, This Adventure Ends and Foolish Hearts). It was moving a lot slower and the relationships and humour felt quieter. In retrospect though, having read the entire novel, those first 100 pages or so are all about building connections and hinting forwards.

"A thousand electric cars could run on how you feel when you know that the person you like likes you back ... of all the happy coincidences to ever exist, it's one of the happiest."

Now, all of the main romances in Emma Mills's books are slow-burning (which I love), but this one is probably most so. It takes a while for Devon and Ezra to even have a friendly conversation where he makes eye contact with her, I warn you, but I think, in the end, that makes their eventual connection so much more special. I loved reading about their interactions, knowing how blatantly they felt for each other, and just waiting for the dawning realisation to hit.

My favourite element of this book was absolutely the relationship between Devon and Foster. It began as difficult to navigate; Devon felt resentment and embarrassment and irritation and Foster was obviously desperate to form a relationship of some sort with her. I loved experiencing them grow closer, learn to care for each other, share their feelings and defend one another. When Devon finally refers to herself as Foster's sister, it actually made me tear up a little.

“It's weird. Sometimes it feels like we're still the ones in the pictures, and everything that happened after happened to other people. And then sometimes we're the other people, and the strangers are in the frames.”

Learning more, bit by bit, little by little, about what Foster had been through at home, with his family, was really heartbreaking. Certain conversations he shared with Devon, and through the friendship he formed with Ezra, were so tender and sad. When Devon's parents decided to adopt him, and his group of new friends waiting for him in the hospital, were two of my favourite moments for his character. Likewise, learning about Ezra's haunted past created so much empathy and understanding for him as a character.

“Why would I want someone I had to make love me?”

In terms of friendship, I think that close-knit, enviable group of friends was lacking here where it exists in the other three Emma Mills books, but I think the friendship with Cas is a really interesting one. I kind of worried that it would turn cliched, so that he would magically fall in love with Devon and declare it the second he found out about her and Ezra. Thankfully it really didn't go in that direction; Cas was definitely a flawed character, perhaps not the quintessential horrible jock, but certainly not the hero of the story. I also loved seeing Devon come to the realisation that    was not her enemy and instead, potentially, her good friend. The cute, quirky friendship Devon had with Jordan was also adorable and hilarious and I wish it had featured even more, if anything.

“A page in the story of my life that I never could've anticipated.”

So that's how much I loved this book. What an incredible debut. I'm desperate for Emma Mills to be publishing like at least a book a month at this point.

Posted by Exploration of Creation at 08:42