A Review: Francesca Zappia's Eliza and Her Monsters

Today's post is going to be a book review of the best book I've read in 2018 so far - Francesca Zappia's Eliza and Her Monsters. This book is also the only one that's received 5 stars from me so far in January, which is kind of a big deal, because last year in January, I gave out five! Anyway, on with the review... 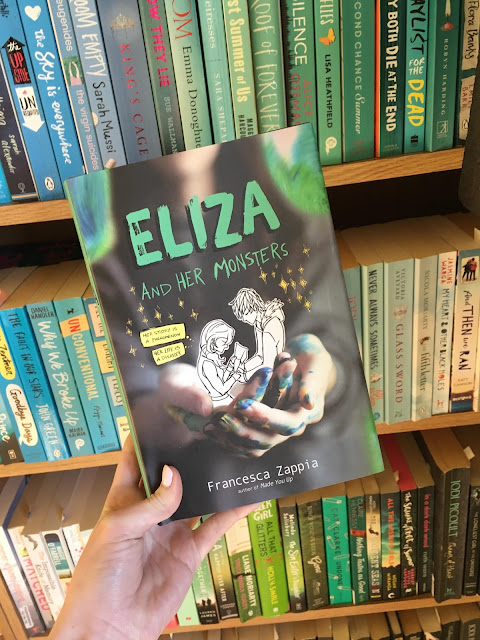 "There are monsters in the sea."

This is the story of Eliza, an introverted, lonely teenage girl who feels as though she blends right in to the world around her, as well as constantly fighting with her family and having no real friends at school. But Eliza leads a secret double life; online she is LadyConstellation, the beloved creator of a hugely famous webcomic called Monstrous Sea. The story follows Eliza as her two worlds collide, with some incredible, and some devastating results. If you loved Alice Oseman's Radio Silence, you'll love this, too (and vice versa)- the stories are incredibly similar and equally brilliant.

I really loved Eliza as a protagonist; I think the character had potential to go awry and become irritating (what with the arguing with her family and the self-deprecating comments) but Francesca Zappia wrote her just perfectly.  It was also as lovely as ever to read about a shy, creative, smart female protagonist. As I just mentioned, the issues with her family were the only potentially problematic element for me; the slow, steady resolve of these problems was both brilliantly written and dragged-out, it was making me nervous thinking the book would end with them on bad terms still!

“I made Monstrous Sea because it's the story I wanted. I wanted a story like it, and I couldn't find one, so I created it myself.”

I also loved reading about her passion for writing, because I found it so personally relatable - I love YA books so much, but actually so few having reading or writing as a key element within them. Eliza getting lost it the world that she imagined and created was really special for me to read as a bookworm & writer myself. It was also pretty inspiring.

“How can I want something so badly but become so paralyzed every time I think about taking it?”

The pacing of Eliza and Wallace's relationship was also really great, it made their story that much more believable and cute. I loved Wallace as a love interest; he was passionate and shy and just generally lovely. The backstory about Wallace's father was really surprising, as well as hugely tragic and emotive. Wallace's selective mutism was also written really well, I was very impressed with that element.

"The things you care most about are the ones that leave the biggest holes."

However, I had HUGE issues with Wallace's response to Eliza's reveal as LadyConstellation; he was SO incredibly selfish. Whilst I get him feeling betrayed/upset about her lying to him and that reaction being justified, his reaction to her not finishing Monstrous Sea in time for him to get the prose-version published was NOT ACCEPTABLE. It is HER story, not his. If you're that desperate to get a book published so he can afford college, WRITE YOUR OWN STORY. However, this didn't destabilise the story as a whole, because I think it was a really brave addition to the story; it made Wallace seem more real, more flawed, more annoying, selfishly human, and it made the ending even more satisfying.

"Truth is the worst monster, because it never really goes away."

I loved the comic book elements throughout, also, mainly because they reminded me of Fangirl by Rainbow Rowell!! It was also really cool to see how the characters looked/read excerpts from their stories, as they are so integral to the main plot of the novel/mentioned so often. I would not be surprised at all if Monstrous Sea itself was published as a novel, to be honest, just like Carry On - I'd read it for sure!!

"She drew so many monsters that she became a monster herself."

Overall, I loved so many things about this book. I loved the online friendships depicted so positively, I loved the way Eliza slowly began to learn things she never knew about her younger brothers, I loved the complete worshipping of geekiness in general. This book was so great, and I'd recommend it to anybody. Also, it's just so beautiful to own - I really love the front cover (and usually I hate any covers with real-life human beings on them!). I want to say a thousand and one things about this book, but I'll say no more now other than: READ IT.

“Like life, what gives a story its meaning is the fact that it ends. Our stories have lives of their own—and its up to us to make them mean something.”

Posted by Exploration of Creation at 03:33