Today's post is going to be another Try A Chapter tag - I did this once before and really enjoyed it, in fact I discovered two incredible books, one of which made my Top 5 of 2017 list, so get that check out if you want to know what those were!! Basically, I have picked five books from my TBR, read the first chapter of each, and based on that and that alone, I've decided which book I want to read most of all. So, let's get started!! 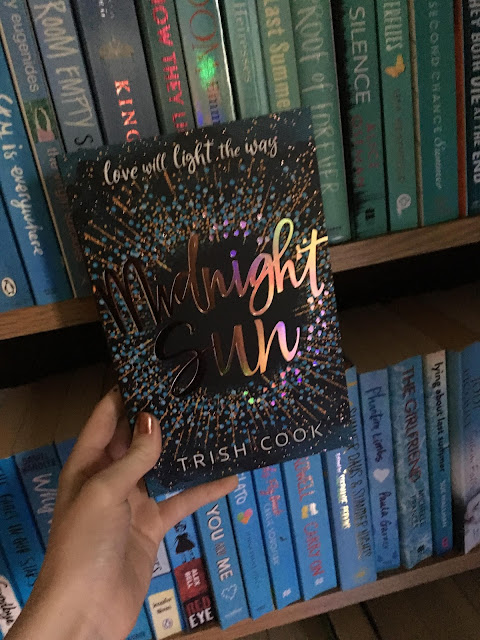 Katie can't leave her house during the day: she has a rare disease that makes even the smallest amount of sunlight deadly. But everything changes when one evening, singing her heart out on a deserted station platform, she meets Charlie. Before the night is out, Katie is smitten. But she hasn't told Charlie her secret. She just wants to have her normal love story, before reality kicks in. Lost in her night-time summer romance, Katie knows that love will light the way.

[HAVING READ ONE CHAPTER: Admittedly, this first chapter was super short, so I couldn't get an awful lot from it. It was a good start, though - the necessary exposition it handled in a really subtle way, briefly mentioning the disease at the centre of the story, mother's death and the introduction of father & best friend. Although I did feel situated in the story well, I didn't feel any emotional connection yet and I have to admit, the thought of the plot that's coming being so similar to Everything, Everything (which I didn't enjoy) is putting me off at this stage.] 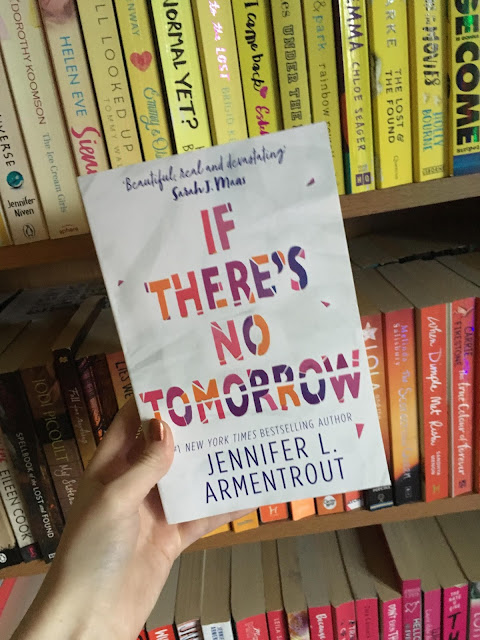 Lena has always felt immortal. But one night can change everything. Lena and Sebastian have been close for as long as anyone can remember. Best friends, even. But secretly Lena has been wanting something more-Sebastian could be more than a friend, if only Lena could figure out how to convince him that they could, and should be together. But in a single night, after a single party, everything changes and suddenly Lena isn't thinking about her relationship with Sebastian at all.

[HAVING READ ONE CHAPTER:This book did have a prologue but I don't count those as chapters, especially as their contents are often from elsewhere in the narrative, as this one was. Chapter One had some really nice moments, notably the love of books and Skylar as a nice change from her stereotype. Lena and Seb sound like great characters already and I'm really eager to learn more about Seb. I have really high expectations for this book, because last year I read and loved Jennifer L. Armentrout's The Problem With Forever!!]

Siobhan vivian’s the last boy and girl in the world 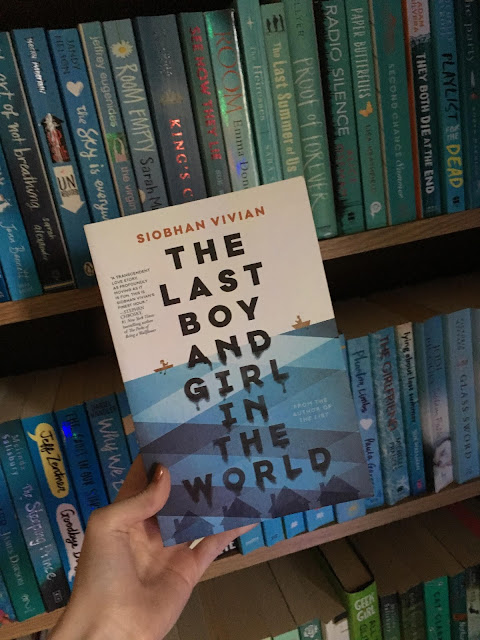 What if your town was sliding underwater and everyone was ordered to pack up and leave? How would you and your friends spend your last days together? While the adults plan for the future, box up their possessions, and find new places to live, Keeley Hewitt and her friends decide to go out with a bang. There are parties in abandoned houses. Canoe races down Main Street. The goal is to make the most of every minute they still have together. And for Keeley, that means taking one last shot at the boy she's loved forever…

[HAVING READ ONE CHAPTER: I've heard some great things about this book, but my only previous reading experience of Siobhan Vivian is from The List, which I really didn't like, so I'm half-excited, half-sceptical!! This chapter was very intriguing - I like books that start in the future, then go back in time and work up to that point once more within the main narrative. There were so many emotions I felt reading this chapter - curious, sad, interested, engaged.]

Benjamin alire saenz’s the inexplicable logic of my life 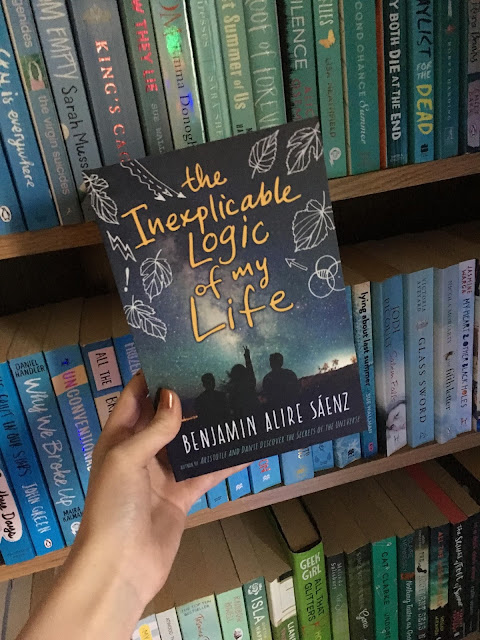 Sal used to know his place with his adoptive gay father, their loving Mexican American family, and his best friend, Samantha. But it's senior year, and suddenly Sal is throwing punches, questioning everything, and realizing he no longer knows himself. If Sal's not who he thought he was, who is he?

[HAVING READ ONE CHAPTER: This book had a really solid start and establishment of characters and relationships; Sam, in particular, is a best friend who I could potentially adore, if she continues to be as cool as she was here. I'm also really interested to meet Sal's father, who is gay, and see how their relationship develops throughout the book. Finally, I'm intrigued to find out more about Fito's character, given the establishment of his difficult home-life. I feel like there's going to be a lot going on in this novel.]

Jasmine warga’s here we are now 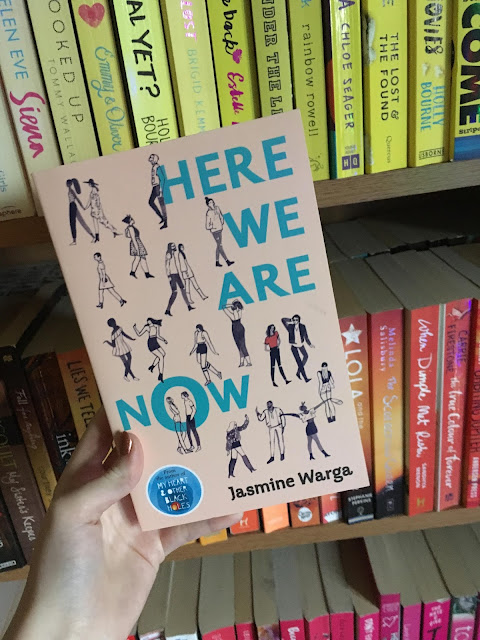 Despite sending him letters ever since she was thirteen, Taliah Abdallat never thought she'd ever really meet Julian Oliver. But one day, while her mother is out of the country, the famed rock star from Staring Into the Abyss shows up on her doorstep. This makes sense - kinda - because it turns out Julian Oliver is Taliah's father... When Julian asks her to go with him to his hometown to meet the family she has never known, Taliah embarks on a three-day voyage of discovery - of her father, of the past her mother has never shared with her, and of herself.

[HAVING READ ONE CHAPTER: I read Jasmine Warga's My Heart and Other Black Holes at the end of 2017 and really enjoyed it, giving it 4.5 stars, so I'm excited for this book. The opening was engaging and interesting, with a good introduction of Harlow and tension with Quinn. Mother sounds like a great character and the father storyline I think should be really interesting - I hope the book continues to focus on these female friendships and family dynamics, and not stray to far into other stuff, like romance for instance.]

So, that's what I thought of the five first chapters I read for this tag!! Having read them all, I've decided to go for...

If There's No Tomorrow!

I'm super excited about this book mainly because of the reading experience I had with Jennifer L. Armentrout's The Problem with Forever last year, but this was also the chapter I felt most engaged with, and the book I felt most reluctant to put down after just one chapter.

I ended up really enjoying this book; The first like 150 pages, basically most of the "yesterday" section, were kind of mixed for me. I felt like the scenes with Lena and Sebastian were good but other scenes felt pretty messy and there was too much repetitive dialogue. In the "after" sections, there were some really interesting themes explored really well. I liked all the focus on guilt, blame and responsibility and I felt as though Lena's inner monologues were well written, emotive and incredibly convincing. Also, great to see discussion of drink-driving, peer pressure & wearing seatbelts.

So once again, doing this tag helped me discover a really great book! I'll be doing it again in February or March, so watch out for that!! Let me know if you've done the same.


Posted by Exploration of Creation at 05:04