Today's post is my regular monthly TBR! As you can tell, I'm still going with my unwrapping-TBR method! So far I am really enjoying this process, and I think I might redo it in the future when I've collected a large number of books again (that won't take long, let's be honest). Shoutout to my older sister for her six bookish choices, detailed down below!! 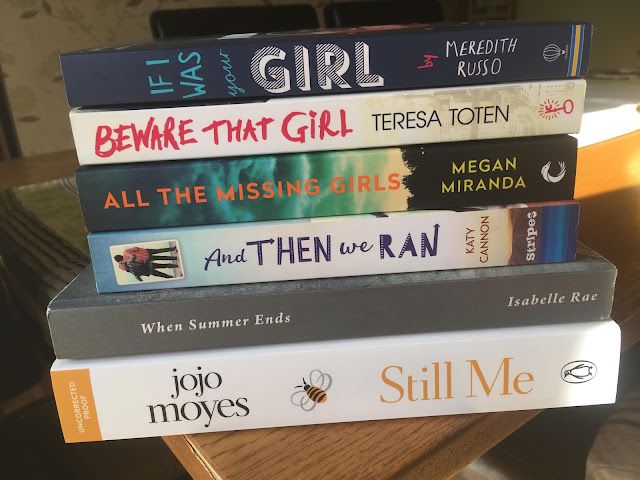 Meredith russo’s if I was your girl

Amanda Hardy is the new girl in school. Like anyone else, all she wants is to make friends and fit in. But Amanda is keeping a secret, and she's determined not to get too close to anyone. But when she meets sweet, easygoing Grant, Amanda can't help but start to let him into her life. As they spend more time together, she realizes just how much she is losing by guarding her heart.Because the secret that Amanda's been keeping? It's that at her old school, she used to be Andrew. Will the truth cost Amanda her new life, and her new love?

Kate O’Brian appears to be a Have-Not. Her whole life has been a series of setbacks she’s had to snake her way out of—some more sinister than others.  As the scholarship student at the Waverly School in NYC, Kate has her work cut out for her: her plan is to climb the social ladder and land a spot at Yale. She’s already found her “people” among the senior class “it” girls—specifically in the cosseted, mega-wealthy yet deeply damaged Olivia Sumner.  When the handsome and whip-smart Mark Redkin joins the Waverly administration, he immediately becomes especially close to Olivia, a fact she’s intent on keeping to herself. It becomes increasingly obvious that Redkin poses a threat to Kate, too, in a way she can’t reveal—and can’t afford to ignore.

Megan miranda’s all the missing girls

It’s been ten years since Nicolette Farrell left her rural hometown after her best friend, Corinne, disappeared from Cooley Ridge without a trace. Back again to tie up loose ends and care for her ailing father, Nic is soon plunged into a shocking drama that reawakens Corinne’s case and breaks open old wounds long since stitched. The decade-old investigation focused on Nic, her brother Daniel, boyfriend Tyler, and Corinne’s boyfriend Jackson. Daniel and his wife, Laura, are expecting a baby; Jackson works at the town bar; and Tyler is dating Annaleise Carter, Nic’s younger neighbor and the group’s alibi the night Corinne disappeared. Then, within days of Nic’s return, Annaleise goes missing.

Katy cannon’s and then we ran

Megan knows what she wants out of life and she intends to get it, whatever her parents say. Elliott has given up on all his plans for the future – but then Megan bursts into his life with a proposal that could change it forever. Together they embark on a road trip to escape their hometown and chase their dreams. But life is a journey and not even Megan can control where theirs will lead…

Louisa Clark arrives in New York ready to start a new life, confident that she can embrace this new adventure and keep her relationship with Ambulance Sam alive across several thousand miles. As she begins to mix in New York high society, Lou meets Joshua Ryan, a man who brings with him a whisper of her past. Before long, Lou finds herself torn between Fifth Avenue where she works and the treasure-filled vintage clothing store where she actually feels at home. And when matters come to a head, she has to ask herself: Who is Louisa Clark? And how do you reconcile a heart that lives in two places?

Chloe Henderson has never been one to break the rules or push the boundaries… but during her summer break, she and her friends use fake IDs to sneak into a club. It’s there that she meets handsome and alluring bartender, Will Morris. The pair hit it off immediately, growing closer with every passing day. But as with every summer, it has to end sometime. Chloe’s senior year approaches and there’s a shock in store when she returns to do her final year at school. Will is there too, but he’s not one of her fellow students…

So those are the books I have to read in March!! I'm really excited about most of them - if you want to find out what I thought, you can add me as a friend & follow my reviews on goodreads, or wait for my monthly favourites/wrap-up post at the end of March!!

Posted by Exploration of Creation at 05:36