A Tag: Try A Chapter

Today I'm having another shot at the Try A Chapter tag, because it's previously introduced me to some amazing books. The basic premise is this: I choose 5 books I'm interested in reading, read the first chapter of each and based on that, and that alone, decide on just one to read and rate. So, let's get started... 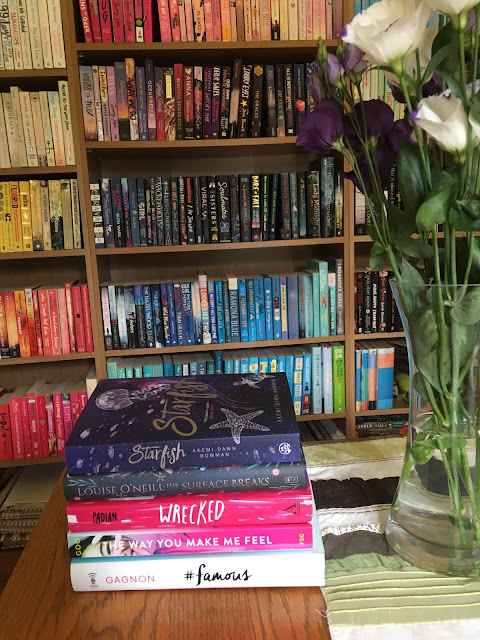 BLURB: In this modern-day love story, Girl likes Boy, Girl takes photo of Boy and posts it online, Boy becomes accidentally insta-famous. And what starts out as an innocent joke spirals into a whirlwind adventure that could change both their lives—and their hearts—forever. But are fame and love worth the price?

HAVING READ CHAPTER 1:
This wasn't a bad opening chapter. I feel like it was a little long, considering the small amount of stuff that was revealed/happened. Some hints of a fun, if slightly cringe-worthy, contemporary to come. Nothing mind-blowing, though.

Maurene Goo’s The Way You Make Me Feel

BLURB: Clara Shin lives for pranks and disruption. When she takes one joke too far, her dad sentences her to a summer working on his food truck, the KoBra, alongside her uptight classmate Rose Carver. Not the carefree summer Clara had imagined. But maybe Rose isn't so bad. Maybe the boy named Hamlet (yes, Hamlet) crushing on her is pretty cute. Maybe Clara actually feels invested in her dad’s business. What if taking this summer seriously means that Clara has to leave her old self behind?

HAVING READ CHAPTER 1:
A relatively fun and expositional opening chapter. It felt like a really nice change to me to have our female protagonist fill that "class clown" kind of role, because usually humour, especially in the high school classroom, is so dominated by male characters, as if girls can't be funny.

BLURB: Everyone on campus has a different version of what happened that night. Haley saw Jenny return from the party, shell-shocked. Richard heard Jordan brag about the cute freshman he hooked up with. When Jenny accuses Jordan of rape, Haley and Richard are pushed to opposite sides of the school’s investigation. Now conflicting versions of the story may make bringing the truth to light nearly impossible—especially when reputations, relationships, and whole futures are riding on the verdict.

HAVING READ CHAPTER 1:
Actually a really dull opening chapter - the sort that if you hadn't read the blurb, and had no clue what the rest of the novel was about, you probably wouldn't bother to buy the book. Sorry if that sounds really harsh, but it's true!! There is the briefest hint of what may be to come, but overall, very uninspiring.

BLURB: Deep beneath the sea, off the cold Irish coast, Gaia is a young mermaid who dreams of freedom from her controlling father. On her first swim to the surface, she is drawn towards a human boy. She longs to join his carefree world, but how much will she have to sacrifice? What will it take for the little mermaid to find her voice?

HAVING READ CHAPTER 1:
I was pretty disappointed by this one, I can't lie. I was expecting and wanting something with a little more punch, considering how ferocious of a writer Louise O'Neill is, but I suppose chapter one isn't always the place for that. I wanted more mermaid details, too!!! Maybe I just wasn't in the mood for this one, who knows?!

BLURB: Kiko Himura has always had a hard time saying exactly what she’s thinking. With a mother who makes her feel unremarkable and a half-Japanese heritage she doesn’t quite understand, Kiko prefers to keep her head down, certain that once she makes it into her dream art school, Prism, her real life will begin. But then Kiko doesn’t get into Prism, at the same time her abusive uncle moves back in with her family. So when she receives an invitation from her childhood friend to leave her small town and tour art schools on the west coast, Kiko jumps at the opportunity in spite of the anxieties and fears that attempt to hold her back. And now that she is finally free to be her own person outside the constricting walls of her home life, Kiko learns life-changing truths about herself, her past, and how to be brave.

HAVING READ CHAPTER 1:
Gorgeous opening chapter!! Instant emotional connection with Kiko and immersion into her world. Understanding of family dynamics within a few paragraphs. Such curiosity to learn more about why Kiko's mother appears to be so awful. Beautiful writing style.

Obviously, Starfish by Akemi Dawn Bowman. I mean, by a clear mile.


HAVING READ THE ENTIRE BOOK:

I am so, so pleased I read this book now. I was worried about which book would win this contest, because it was always going to be the first book I read after finishing my Harry Potter spree, no matter what it was, so it was likely to suck in comparison. This was so great, though. That first chapter illustrated perfectly what was to come, and yet there was so much more. The writing style in particular is really beautiful - at times, the book reminded me of Jandy Nelson's I'll Give You The Sun, which is basically the biggest possible compliment I can give it. Insightful, sensitive and interesting exploration of social anxiety, art, emotional abuse, family dynamics, sexual abuse and many more topics. I couldn't recommend reading this more. I really do believe it will be on my favourites list at the end of 2018. I cannot wait to read more from Akemi Dawn Bowman.

So there we have it - another super successful try a chapter tag! I have such a great history of finding wonderful books through this tag, so you might get just as lucky - give it a try!! Tag me on Twitter with the result (@ECbookblog).

Posted by Exploration of Creation at 08:49