Today's post is going to be a quick show & tell of the books that I received as Christmas presents from my wonderful parents (courtesy of my exceptionally well curated Amazon wish-list). Please let me know if you've read any of these novels and your (spoiler-free!) thoughts, by leaving a comment down below. 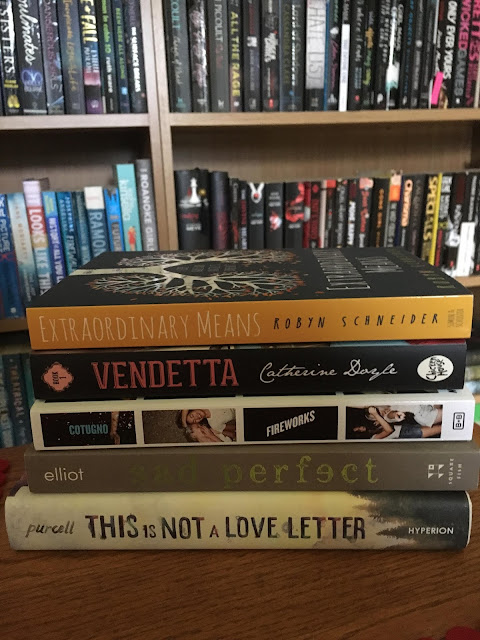 (Can I just apologise for the shoddy lighting? This was taken when the gorgeous Christmas tree was still up - gorgeous but giant, so it blocked all light from the room! This is also why I didn't take individual photos of each book like normal; now they're wrapped up in my TBR stack so it's too late!!)

Kim Purcell’s This is Not a Love Letter

One week. That's all Jessie said. A one-week break to get some perspective before graduation, before she and her boyfriend, Chris, would have to make all the big, scary decisions about their future--decisions they had been fighting about for weeks.Then, Chris vanishes. The police think he's run away, but Jessie doesn't believe it. Chris is popular and good-looking, about to head off to college on a full-ride baseball scholarship. And he disappeared while going for a run along the river--the same place where some boys from the rival high school beat him up just three weeks ago. Chris is one of the only black kids in a depressed paper mill town, and Jessie is terrified of what might have happened.As the police are spurred to reluctant action, Jessie speaks up about the harassment Chris kept quiet about and the danger he could be in. But there are people in Jessie's town who don't like the story she tells, who are infuriated by the idea that a boy like Chris would be a target of violence. They smear Chris’s character and Jessie begins receiving frightening threats.Every Friday since they started dating, Chris has written Jessie a love letter. Now Jessie is writing Chris a letter of her own to tell him everything that’s happening while he’s gone. As Jessie searches for answers, she must face her fears, her guilt, and a past more complicated than she would like to admit.

Sixteen-year-old Pea looks normal, but she has a secret: she has Avoidant/Restrictive Food Intake Disorder (ARFID). It is like having a monster inside of her, one that not only dictates what she can eat, but also causes anxiety, depression, and thoughts that she doesn’t want to have. When she falls crazy-mad in love with Ben, she hides her disorder from him, pretending that she’s fine. At first, everything really does feel like it’s getting better with him around, so she stops taking her anxiety and depression medication. And that's when the monster really takes over her life.

It was always meant to be Olivia. She was the talented one, the one who had been training to be a star her whole life. Her best friend, Dana, was the level-headed one, always on the sidelines, cheering her best friend along. But everything changes when Dana tags along with Olivia to Orlando for the weekend, where superproducer Guy Monroe is holding auditions for a new singing group, and Dana is discovered too. Dana, who’s never sung more than Olivia’s backup. Dana, who wasn’t even looking for fame. Next thing she knows, she and Olivia are training to be pop stars, and Dana is falling for Alex, the earnest, endlessly talented boy who’s destined to be the next big thing. It should be a dream come true, but as the days of grueling practice and constant competition take their toll, things between Olivia and Dana start to shift . . . and there’s only room at the top for one girl. For Olivia, it’s her chance at her dream. For Dana, it’s a chance to escape a future that seems to be closing in on her. And for these lifelong best friends, it’s the adventure of a lifetime—if they can make it through.

[I've read this before but for some reason only own book two, so this is a good one for the collection!]

When five brothers move into the abandoned mansion in her neighbourhood, Sophie Gracewell's life changes forever. Irresistibly drawn to bad boy Nicoli, Sophie finds herself falling into a criminal underworld governed by powerful families. As the boys' dark secrets begin to come to light, Sophie is confronted with stinging truths about her own family, too. She must choose between two warring dynasties - the one she was born into, and the one she is falling in love with. When she does, blood will spill and hearts will break.

[Again, I've read this before but never owned it which is baffling because I remember loving it a lot.]

When he's sent to Latham House, a boarding school for sick teens, Lane thinks his life may as well be over.But when he meets Sadie and her friends - a group of eccentric troublemakers - he realises that maybe getting sick is just the beginning. That illness doesn't have to define you, and that falling in love is its own cure.

So those were my Christmas present books this year! What books did you receive as gifts or buy with money/vouchers? I hope you all had a wonderful holiday season, celebratory or not.

Katie
Posted by Exploration of Creation at 07:25